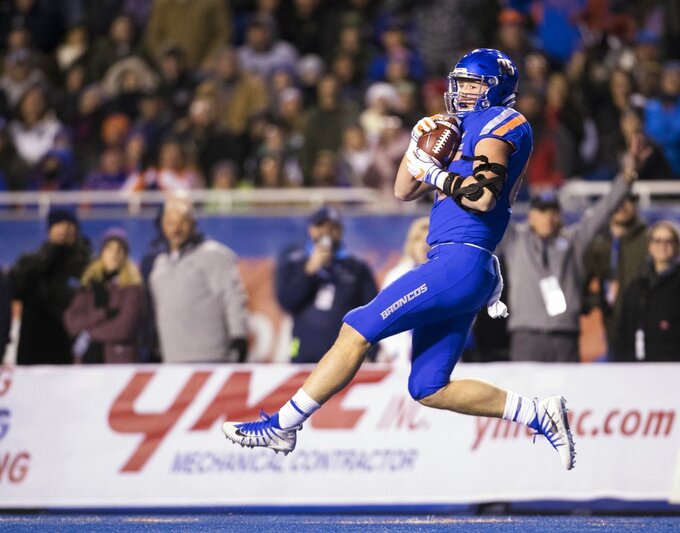 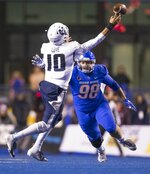 BOISE, Idaho (AP) — Boise State has a chance for a conference title and maybe even a big bowl game.

Brett Rypien threw for 310 yards and a touchdown, Alexander Mattison rushed for 200 yards and three scores, and the No. 21 Broncos beat No. 14 Utah State 33-24 on Saturday night.

Boise State (10-2, 7-1), which has won seven straight since losing to San Diego State on Oct. 6, will host Fresno State for the Mountain West championship next Saturday in a rematch from last season.

"We didn't have enough when it mattered most," Utah State coach Matt Wells said. "We continued to battle and found a way back into it. But obviously we couldn't make a play at the end."

In a see-saw affair early, the game seemed to turn in Boise State's favor after a big gamble by the Aggies.

Trailing 10-7 early in the second quarter, Utah State faked a punt on fourth-and-1 from its own 34 on a direct snap to tight end Dax Raymond. But Boise State, which had its defensive unit on the field, stuffed Raymond at the line of scrimmage.

"We've been holding that play for a while and that was confirmed the first two times they punted," Wells said. "We thought it was there, but they just made a better play. And that's on me."

Boise State promptly responded with a scoring drive that took seven plays and overcame a pair of personal fouls, culminating on a 1-yard run by Mattison.

Despite a 363-yard passing performance by Jordan Love, Utah State never seemed to find a rhythm on offense.

The Aggies stayed within striking distance late in the fourth quarter after Gerold Bright took a screen pass from Love and raced 83 yards for the touchdown.

But Boise State drove right back down the field, scoring on another 1-yard run by Mattison to ice the victory.

Wells was emotional when talking what he said in addressing his team after the game.

"I sure didn't have a speech prepared for that," Wells said. "I didn't think about it one minute. I was very confident coming into the game. There's a lot of hurt and pain in that locker room — and I think that's reflective of how much they've put into this in preparation since January. But we have a good year and we've got another game left."

Boise State is one of only three teams to beat two ranked opponents in November, joining Alabama and Ohio State. It also is the only team from the Group of Five schools to beat six bowl-eligible teams this season, one more than UCF.

On a 34-yard scoring drive in the first quarter, Boise State had to overcome two questionable personal fouls, prompting a comical response from Harsin afterward: "We overcame a lot tonight," Harsin said in a thinly veiled reference to the penalties. "It was like WWE. It was meant to be close. That was just going through my mind for some reason."

Utah State: The Aggies weren't consistent on the road this season and it finally caught up with them. However, Love is only a sophomore and the future is bright for Utah State in the Mountain West.

Boise State: The Broncos have yet to put together four solid quarters since early in the season, but they continue to find a way to win in close games down the stretch. While this hasn't been Harsin's strongest team, it has been resilient and could be a formidable foe in a New Year's Six bowl should Central Florida stumble next week and open the door for the Broncos.

Utah State: The Aggies will slide but shouldn't fall all the way out of the rankings after losing a relatively close game to another ranked team.

Boise State: The Broncos may move up a couple of notches but there isn't much room to climb, as most of the teams directly in front of them won over the weekend.

Utah State: The Aggies will await the bowl announcements on Dec. 2 to see where they will conclude the season.

Boise State: The Broncos will remain at home next week to host Fresno State in a rematch of last season's Mountain West championship game.