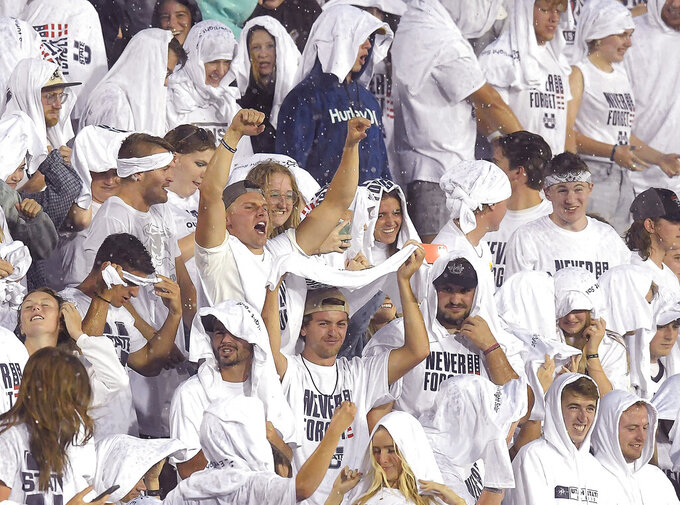 LOGAN, Utah (AP) — Logan Bonner passed for a career-best 390 yards with four touchdowns as Utah State clawed out of an early hole to rally past North Dakota 41-24 on Friday night.

Bonner more than doubled his passing yards from the 143 in Utah State's last-minute upset at Washington State last week, and matched his career high with four touchdowns.

North Dakota's Tommy Schuster was 29-of-43 passing for 348 yards with a touchdown. Otis Weah, who posted 114 yards and three touchdowns in the season opener, was held to 47 yards on 17 carries Friday with no scores.

After a field goal to open the second half, the Fighting Hawks (1-1), ranked No. 6 in the FCS coaches poll, were forced to punt away their next four possessions while Utah State went on a scoring spree.

Bonner had touchdown passes of 54, 4, 75 and 41 yards. One play after his lone interception on the night led to a North Dakota field goal, Bonner found Deven Thompkins on swing pass for a one-play, 75-yard touchdown sprint up the left sideline that put the Aggies up for the first time, 27-24, just 12 seconds later.

Bonner threw a 41-yard dart to Derek Wright in the fourth quarter. Backup Andrew Peasley put the cherry on top with a 59-yard keeper on a rollout to the right side to make it 48-24 with just over two minutes left.

In a game delayed 90 minutes by lightning strikes right after the national anthem, and then a quarter-hour more when the stadium lights went out during the coin toss, the Fighting Hawks wasted no time getting on the board.

Brock Boltmann took the ball on a reverse and then passed 13 yards to Bo Belquist at the front of the end zone as North Dakota took the opening drive 71 yards.

The lightning strikes continued as Schuster found Adam Zavalney over the middle in the end zone for a 12-yard touchdown on the next Fighting Hawks possession. Quincy Vaughn came in at quarterback for a goal-line play and found Tyler Burian in the end zone on a rollout to the right. It was Vaughn’s second pass of the season.