Brett Rypien looking for big finale for No. 22 Boise State 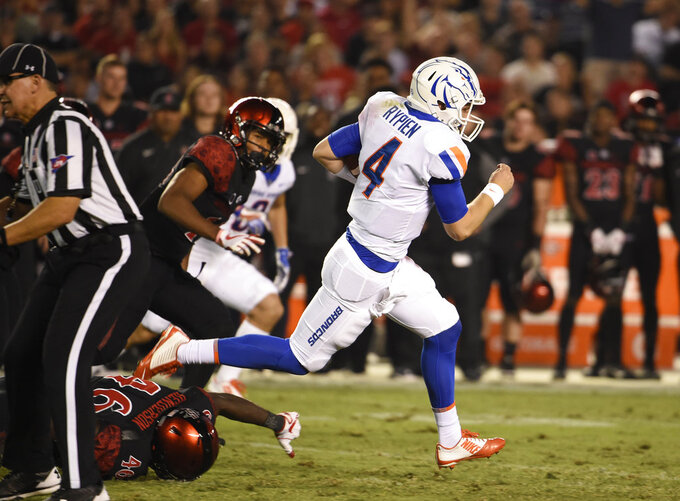 FILE - In this Oct. 14, 2017, file photo, Boise State quarterback Brett Rypien (4) breaks away from San Diego State defenders on a long run during the first half of an NCAA college football game, in San Diego. Rypien is about to become a rarity in college football, a quarterback with the skill from the outset of his arrival on campus to be the starter for the vast majority of his four years at Boise State. (AP Photo/Denis Poroy, File)

Brett Rypien is about to become a rarity in college football, a quarterback with the skill from the time of his arrival on campus to be the starter for the majority of his four years at Boise State.
He's won a conference title. He's won bowl games. Yet there was a time a year ago as a junior that his spot as the Broncos starter was being questioned by outsiders and challenged from within.
"I don't think frustrating was the right word. You know, I never really try to get frustrated. I think that's just negative for yourself and not really positive for the entire team as well, showing frustration. Especially in the position that I'm in," Rypien said. "But, it's definitely hard at times having to go through that. But like I said, it made me a lot better player. And you know looking back on it I actually am glad that that happened to me."
Rypien will start his senior season Saturday when the 22nd-ranked Broncos open at Troy. While Rypien didn't get his first start until the fourth game of his freshman season, he'll join Kellen Moore in rare company as a four-year starter for the Broncos. Rypien's career hasn't been quite as good as Moore's but he's still one of the most decorated quarterbacks in the school's history.
He ended up leading the Broncos to a Mountain West title and a Las Vegas Bowl victory over Oregon during his difficult junior season. He also nearly lost his starting job to graduate transfer Montell Cozart.
"I thought Brett, that's the neatest thing, he handled it well," Boise State coach Bryan Harsin said. "I think there was some of that frustration of, at times, being taken out of the plan and the reality of, 'If this is what it takes for us to win, I'm all in.' He really was. He showed that, too. That's a maturity that I haven't seen from many people and Brett handled that."
Cozart was different from Rypien and the Broncos needed what his skills provided. Cozart could run and pass. He challenged Rypien's standing early last season when the Broncos stumbled to a 2-2 start.
"I definitely think it made me better just from the standpoint of I was competing literally every single day in practice and I really got to the point where I didn't know how many snaps I was gonna be able to take during the game," Rypien said. "And knowing that every single one of those matters, that kind of upped my practice habits I think a little bit. And made me focus that much more on every single rep, knowing every single rep I took had to be perfect."
The Broncos eventually arrived at a way of using both Rypien and Cozart at various times during games — sometimes on the same play. Once they started doing that, the Broncos offense took off. Boise State won seven straight before losing to Fresno State in the final game of the regular season, a contest that didn't matter.
A week later, back on the blue turf, Boise State beat Fresno State in the conference title game. And against Oregon in the bowl game, Rypien threw for 362 yards and two touchdowns in the 38-28 win.
"As the season went on, he saw the benefits of it. I think he was excited for some of the changes that we made," Harsin said. "As it went on, we started to have fun with it ... where both Brett and Montell are on the field at the same time. It was pretty cool. It was a pretty cool thing to see that. I thought they thought it was pretty cool, too, because nobody else was doing that."
But now it's all Rypien's show again, although the Broncos may use backups Chase Cord or Jaylon Henderson in brief stints. Rypien has more career passing yards than any other FBS quarterback entering the season and needs 2,815 yards passing to become the all-time Mountain West leader.
The supporting cast around Rypien on offense may be the most talented of his four seasons. Because of that, Harsin said Rypien doesn't need to do anything extraordinary for Boise State to be successful.
"I think any good player understands that, especially a quarterback," Harsin said. "I think he's worked really hard at that, too. His preparation habits are as good as any quarterback I have ever coached or been around. I've got no doubt that's going to translate onto the field when we play."
___
More AP college football: https://apnews.com/tag/Collegefootball and https://twitter.com/AP_Top25