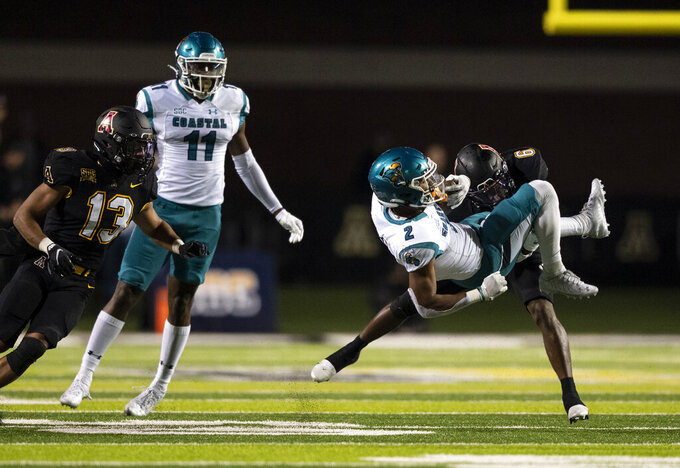 BOONE, N.C. (AP) — Chase Brice is determined to make the most of what is left of his roller-coaster college career. He took a big step forward Wednesday night.

After spending three years at Clemson mostly backing up Trevor Lawrence and then going 2-9 last season as a starter at Duke, Brice transferred to Appalachian State looking for a new start and a chance to win big football games.

“Right now I'm getting an opportunity to kind of flip the script on certain things about me that get talked about and written about,” Brice said. “So that's kind of my goal.”

Malik Williams had a monster game catching some well-placed bombs from Brice, finishing with 10 catches for 206 yards and a touchdown. Camerun Peoples ran for two touchdowns and Corey Sutton had 113 yards receiving and a score for the Mountaineers (5-2, 2-1 Sun Belt). They have never lost at home to the Chanticleers.

The Mountaineers moved into the driver’s seat in the conference's East division and the loss could prevent Coastal Carolina (6-1, 2-1) from reaching the championship game.

“We’re in control of our own destiny right now,” said Appalachian State coach Shawn Clark, whose team bounced back from a 41-13 loss last week at Louisiana-Lafayette. “I’m so proud of this team and everyone involved in our organization.”

Coastal Carolina came in averaging 48.8 points, but the Chanticleers were outgained 575 to 376 and the offense struggled to protect QB Grayson McCall in the second half.

“Look how it’s flipped,” Coastal Carolina coach Jamey Chadwell said. “One loss and now we’re acting like everything in the world is ending. That’s sort of where we put ourselves. Now that we have lost and now we don’t think we’re invincible, hopefully those little things that get us, we’ll get them corrected and move forward.”

Coastal had outscored its opponents by more than 33 points coming in with only one close game — a 28-25 victory at Buffalo on Sept. 18

“This is no disrespect to Coastal Carolina, but they have not played four quarters all season long,” Clark said. “And we have. We have been battled tested. I do believe we have played a tough schedule, a very tough schedule.”

McCall threw for 291 yards and one touchdown for Coastal Carolina. It had a 11-game Sun Belt winning streak snapped.

When asked what he liked best about Brice’s performance, Clark laughed and said, “D, all of the above.

“I thought he had great poise in the pocket,” Clark said. “He had great touch on the football and he made good decisions when he pulled the ball (and ran). We’re glad he is on our football team. He’s a true Mountaineer.”

Appalachian State's defense forced three Coastal Carolina punts on their final three possessions, the last of which set up Brice and the offense with great field position at the Mountaineers 38. From there, Brice went to Williams on consecutive throws of 19 and 16 yards to reach field goal range.

Appalachian State was careful not to score a touchdown in the closing seconds to prevent Coastal Carolina from getting the ball again with Peoples even going down on a knee at the end of one run instead of crossing the goal line. The Mountaineers ran the clock down to 3 seconds before Staton took the field for the winner.

“We felt that if we got them in a game where they had to drop back and pass, it’s in our favor a lot,” said Appalachian State defensive end Caleb Spurlin. “You got guys on the edge that just go make things happen. So I think getting them in that position where you knew they were going to have drop back and pass the ball gave us an edge up.”

It looked as if Coastal Carolina was going to run away with it early on.

The Chanticleers took a 14-0 lead when McCall faked as though he was going to run on a third and 4 play drawing the linebackers in, only to dump a pass over the middle to a wide open Kameron Brown, who raced 74 yards for a touchdown.

But the Mountaineers battled back behind super senior wide Williams, who snared two long passes to set up App State's first score, then hauled in a 47-yard touchdown reception to tie the game after a successful onside kick.

Coastal Carolina: The Chanticleers' offense failed them in the second half as they were limited to just seven points. The defense could never get its rhythm after Chanticleers jumped out to a 14-0 lead.

Appalachian State: It's an upset. It's what the Mountaineers do. Brice played nearly a flawless game, completing 18 of 28 passes and the defense came up with huge stops in the fourth quarter.

The loss gives skeptics more credence that Coastal Carolina had played a weak schedule and was overrated in the polls. This one could drop them down quite a few spots, but it seems unlikely they will fall all the way out of the Top 25. “One game don't define you," Chadwell said.