Brohm turns down Louisville job, will stay at Purdue 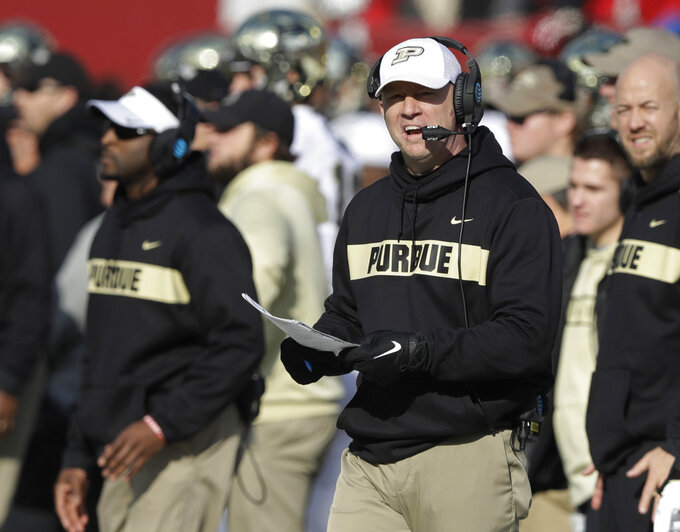 FILE - In this Nov. 24, 2018, file photo, Purdue coach Jeff Brohm watches his team play Indiana during an NCAA college football game in Bloomington, Ind. One day after reportedly meeting with Louisville officials in central Indiana, Brohm informed Boilermakers athletic director Mike Bobinski he was turning down the Cardinals job so he could stay in West Lafayette. (AP Photo/Darron Cummings, File)

Turns out, the timing was off. Besides, he was happy building Purdue's program.

One day after reportedly meeting with Louisville officials in central Indiana, Brohm informed Boilermakers athletic director Mike Bobinski he was turning down the Cardinals job so he could stay in West Lafayette.

"After intense and thorough discussion, I believe it is important to finish the building process we have begun and honor the commitment I made to our football program, players and recruits," Brohm said in a statement initially released to Louisville media. "While going home was very appealing and meaningful to me, the timing was not ideal. I believe that remaining at Purdue is the right thing to do, and I am excited for the challenges ahead."

For the Boilermakers, it's another major victory.

Purdue has now fended off two significant offers from two Power Five conferences over the past 11 months to retain Brohm. And it probably won't be the last time the Boilermakers face such a battle for the 47-year-old Brohm, who is considered one of the bright young coaching minds in college football.

It's taken him only two seasons to turn the Boilermakers from a floundering program into one on the rise, going 13-12 with back-to-back bowl bids for the first time in 2011-12.

Tennessee offered Brohm its job last winter, but Bobinski won that round by giving Brohm a pay raise and a contract extension.

When Louisville fired Bobby Petrino 2½ weeks ago, Cardinals fans began clamoring for the hometown kid and former Louisville star quarterback to return. Brohm was peppered with questions at his weekly news conference the following day, later that week after another report surfaced that he was taking the Louisville job and again after each of the Boilermakers' final two regular-season games — a triple-overtime loss to Wisconsin and Saturday's victory over rival Indiana to retain the Old Oaken Bucket and become bowl-eligible.

All along, Brohm downplayed the probability of his departure from a school dubbed the Cradle of Quarterbacks.

"This has been a very difficult and emotional decision for me and my family. We are extremely happy at Purdue and thankful for the opportunity to lead this program," Brohm said. "As a former Cardinal player and coach, I want nothing but the best for the University of Louisville."

In five seasons as a head coach, Brohm's teams have reached the postseason all five times. He is 43-22 overall.

But this past season may have been his most impressive.

After Purdue started 0-3, Brohm's play-calling became more aggressive. The result: Purdue won four straight to get back in the postseason mix and finished the regular season with three victories over Top 25 foes — Boston College, Iowa and Ohio State — for the first time in 15 years. The 29-point rout over then-No. 2 Ohio State was one of this season's most stunning upsets.

Still, the Boilermakers had to beat the rival Hoosiers in Saturday's regular-season finale to become bowl-eligible. Now, after the 28-21 victory, Purdue (6-6, 5-4 Big Ten) is waiting to find out who and where it will play next.

What they now know is Brohm will be leading them onto the field.

For the Cardinals, it's a bitter disappointment.

Louisville athletic director Vince Tyra appeared to acknowledge Brohm was his top option during an interview last weekend. The two reportedly met Tuesday and Brohm spent most of Wednesday on Purdue's campus debating whether to accept the job.

"While Jeff and I had a terrific conversation about the future of the University of Louisville football program and how he could play a role in our success, it was clear that his heart and mind were still with fulfilling his commitment to Purdue," Tyra said in a statement following the announcement. "We will continue our parallel path to determine the next successful leader of our football program. I'm confident in our process and making a final decision in the near term."

It's unclear where the Cardinals will turn next, though some have speculated Troy coach Neal Brown, Appalachian State coach Scott Satterfield and Cincinnati coach Luke Fickell could be on the list.

Moore grew up in New Albany, Indiana, just across the river from Kentucky, and played at Louisville Trinity, the high school Brohm attended. He now becomes the foundation for Brohm's next chapter at Purdue.