Bryce Love hopes to add new tricks for No. 13 Stanford 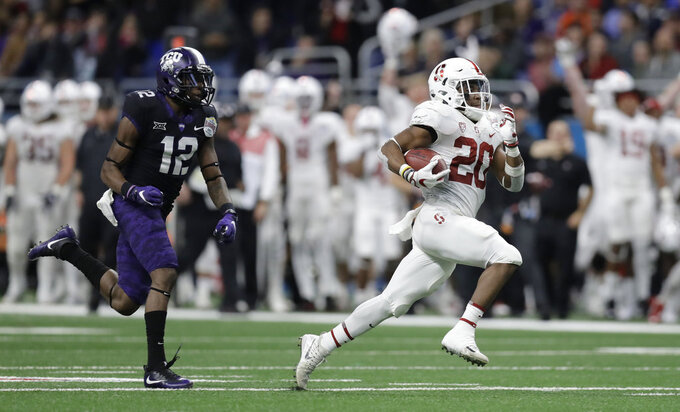 FILE - In this Dec. 28, 2017, file photo, Stanford running back Bryce Love (20) is pursued by TCU cornerback Jeff Gladney (12) as he runs for a touchdown during the second half of the Alamo Bowl NCAA college football game, in San Antonio. Love bucked popular opinion by sticking with the Cardinal rather than declaring early for the NFL draft.(AP Photo/Eric Gay, File)

STANFORD, Calif. (AP) — Bryce Love set the bar pretty high in his record-setting junior season that made him the Heisman Trophy runner-up.
There are a few tricks that he wants to add this season that should make Love and No. 13 Stanford even more of a challenge for defenses. After catching only six passes last season, Love hopes to be a bigger threat as a receiving option for quarterback K.J. Costello this year, starting when the Cardinal open their season against San Diego State on Friday night.
"Just being able to contribute in the pass game more so than last year," Love said of one of his individual goals for 2018. "We're confident in K.J., confident in the protection, confident in the receivers. Just being able to contribute there and help open things up and help open up the running game. Just trying to make the matchups tough."
Love did plenty of that last season when he led all Power 5 running backs in yards rushing (2,118), yards per carry (8.1) and 100-yard games (12). He also set an FBS record with 13 runs of at least 50 yards, including a 51-yard TD against the Aztecs. Love rushed for 184 yards on 13 carries that game with two TDs but it wasn't enough as San Diego State won 20-17.
The Cardinal figure to have much more help for Love this year with Costello entrenched at quarterback, talented outside receivers J.J. Arcega-Whiteside and Trent Irwin, and tight end Kaden Smith.
But slowing down Stanford starts with Love.
"You cannot take a great running back away," San Diego State coach Rocky Long said. "There's no way to defense a great running back other than not being outnumbered or out-positioned in the blocking scheme. We will not be out-positioned or outnumbered on the blocking scheme. Whether we can tackle him or not, that is up for question. So there is no legitimate way to stop a great running back other than your line of scrimmage is better than their line of scrimmage."
Here are some other things to watch:
BIG SHOES: San Diego State has to fill the void left by the only back to rush for more yards last year than Love. Juwan Washington has a high bar to reach as he follows in the line of D.J. Pumphrey and Rashaad Penny, who each rushed for at least 2,000 yards the past two seasons. Penny led the FBS with 2,248 yards as a senior. Washington ran for 759 yards and seven TDs last season, averaging 6 yards a carry. No school has ever had three straight 2,000-yard rushers.
"It's one of those things that if it comes, it comes," Washington said. "It's not something I can just try to force on every game. The biggest thing is to win games and that's what we want to do, so if that comes with it, that'd be good."
COSTELLO'S CHANCE: The Cardinal got a big boost last season when Costello took over as starter late in the season from Keller Chryst. Costello engineered a win over then-No. 9 Washington that helped Stanford win the Pac-12 North, beat rival California, threw four TD passes against Notre Dame and three more in a bowl loss to TCU. Now Costello has had a full fall camp to solidify his role as starter and should be even more comfortable in the spot.
STEPPING UP: The Aztecs have won three straight games against Pac-12 teams, beating Arizona State and Stanford in back-to-back weeks last season, and California in 2016. Before this current run, San Diego State had lost 23 of 24 games against Pac-12 teams. Despite those big early wins a year ago, the Aztecs stumbled the following month with back-to-back conference losses to Boise State and Fresno State, costing them a chance to repeat as Mountain West champions.
BEECHER'S BACK: The Cardinal figure to get a psychological lift with the return of linebacker Ryan Beecher. He was diagnosed with non-Hodgkin's lymphoma last December and missed the bowl game and spring practice. He returned this summer and has been cleared to play.
"The guys are very emotional about him and they should be," coach David Shaw said. "He was in a rough place a few months ago."
___
More AP college football: https://apnews.com/tag/Collegefootball and https://twitter.com/AP_Top25