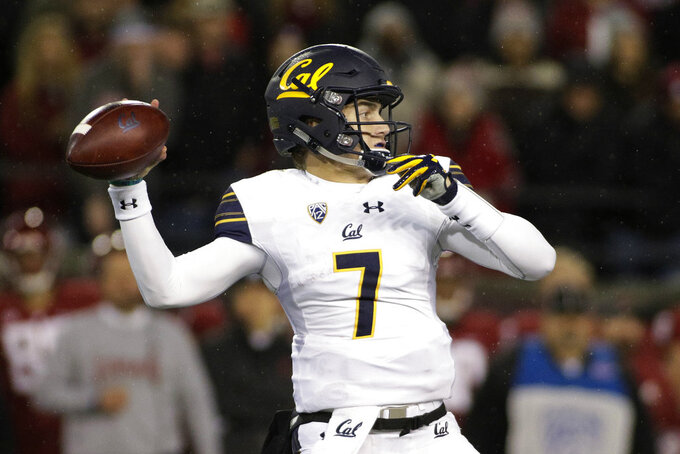 LOS ANGELES (AP) — As Southern California piled up one victory after another in a 14-game winning streak against California, defensive supremacy has always been on the side of the Trojans.

But the Golden Bears have the far sturdier defense going into the Coliseum on Saturday, and with it comes their best chance at victory since the two programs emerged as the dominant forces in the Pac-10 during the mid-2000s.

Cal (5-4, 2-4 Pac-12) is reinventing itself as a team that relies on defense to win games in the second season under coach Justin Wilcox and defensive coordinator Tim DeRuyter. The Gold Bears are allowing 4.8 yards per play this season, which is tied with Kentucky for 22nd among FBS teams.

"Scheme-wise, it is just a nightmare for a quarterback," USC coach Clay Helton said. "They mix it up really, really well and they are very well taught."

Cal is allowing 21.9 points per game, nearly half of what the defense conceded in its final season under coach Sonny Dykes in 2016. But that total includes six turnovers by Cal's offense that have been returned for touchdowns, circumstances that have Wilcox convinced his team can make a bowl game for the second time since 2012.

"We talk about finishing all the time in everything we do," Wilcox said. "Just in how you do everything, whether it's workouts or practice or meetings. It's not about maintenance. It's about we need to play our best football. We have yet to play our best game."

For USC (5-4, 4-3), a return visit to the Pac-12 title game is still in play with wins in its final two conference games and help elsewhere to remove possible tiebreakers against Utah and Arizona State. USC will have to keep its run game rolling against a rush defense that ranks third in the Pac-12, allowing 3.72 yards per carry. The Trojans are averaging 193.6 yards rushing in their five wins, including a season-high 332 yards in a 38-21 win at Oregon State in their last game.

"The plays went because the line was executing and the backs were running hard," Helton said.

Here are some other things to watch for when Cal and USC meet for the 106th time:

STILL ROTATING: Chase Garbers will start at quarterback for Cal, but Wilcox didn't rule out continuing to use redshirt sophomore Brandon McIlwain in certain situations. McIlwain is second on the team in yards rushing (402) and rushing touchdowns (4). However, the transfer from South Carolina has thrown eight interceptions and lost four fumbles. "It goes back to trying to create another play," Wilcox said. "We're still developing at that position. Both of those guys had some plays in the game they'd love to have back. The quarterback's always going to be the center of attention, but we have to help him."

DEPLETED DEFENSE: USC has been coping with limited numbers at safety for much of this season, and now attrition has hit the cornerbacks. Senior Iman Marshall is a game-time decision because of a sprained foot and ankle, while redshirt freshman Greg Johnson will not play because of a shoulder injury. Senior Isaiah Langley and redshirt senior Jonathan Lockett would start if Marshall is not available, with freshmen Olaijah Griffin and Isaac Taylor-Stuart backing them up.

TWO-WAY PLAY?: The Bears might not have weapons at wide receiver that are capable of taking advantage of USC's secondary in its current state. Cal had three receivers transfer in the offseason, and juniors Kanawai Noa, Jordan Duncan and Brandon Singleton have missed time recently because of injuries. The situation is so bad that Wilcox has considered using safeties Ashtyn Davis and Jaylinn Hawkins on offense. Senior quarterback Chase Forrest could be an option at receiver. "We've really talked about everything in terms of what's on the table to play at that position," Wilcox said. "It's not out of the question."

CATCHING ON: With junior wide receiver Michael Pittman Jr. out after sustaining a shoulder injury against the Beavers, freshman Devon Williams is in line to see extensive playing time for the Trojans. Williams had three receptions for 77 yards at Oregon State, including a 41-yard touchdown catch for his first career score. Freshman Amon-Ra St. Brown, who has a team-high 38 receptions for 505 yards, will start in place of Pittman.