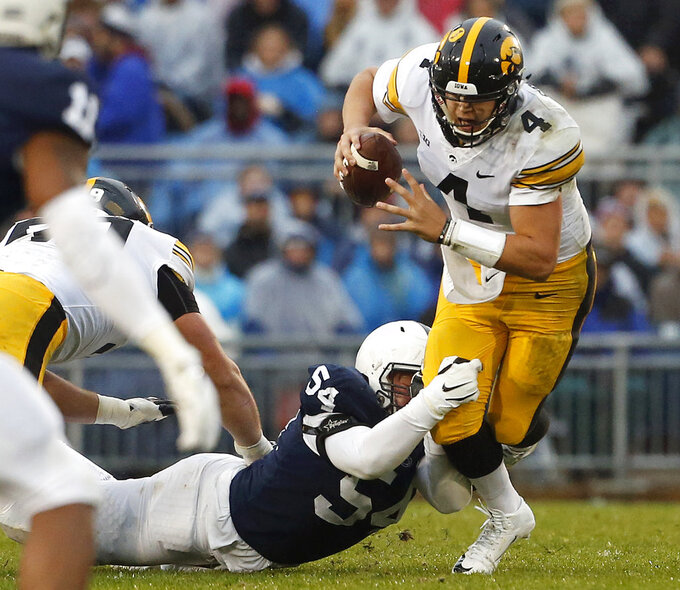 No. 19 Iowa's hopes of a run at a playoff spot were dashed last weekend in a late loss at Penn State. The Hawkeyes can still win the Big Ten West.

Iowa's season might have turned out differently if junior quarterback Nate Stanley's run of somewhat inexplicable interceptions hadn't continued with a pick at the Penn State 2-yard line with 3:18 left in a 30-24 loss. Still, the Hawkeyes will have a chance to advance to the Big Ten title game if they win out and if Wisconsin loses one more time.

"Obviously the loss was disappointing and a little bit frustrating for everybody. But the bottom line is good teams learn from their mistakes," Iowa coach Kirk Ferentz said. "We had some opportunities for some big plays, and it's true in every game, but when you lose a game, those things are magnified a little bit more and become even that much more important."

Stanley clanged the thumb on his right throwing hand off a teammate's helmet in the second half last week. Ferentz said Tuesday that Stanley is "good to go."

Though Stanley has struggled with turnovers at times this season, he is second in the league with 16 touchdown passes and sixth with 220.5 yards passing per game.

"We don't have a better guy on our football team," Ferentz said of Stanley. "Nobody works harder, more invested, so he'll bounce back."

If Iowa can't beat the improved Boilermakers, the goal will be to close out the season on a high note, earn a strong bowl bid and build toward 2019, when a lot of talented players are expected back.

A win on Saturday would keep 2018 very relevant.

The Hawkeyes will likely be favored in their final three games against Northwestern, at Illinois (3-5, 1-4) and at home against Nebraska (2-6, 1-4). Wisconsin still has to play Penn State and Purdue on the road.

"Every week I just talk about the big picture, but that's brief....every week you see a handful of scores that, boy, how did that happen? So the experts aren't always right," Ferentz said. "The best way to do anything is just try to take things a step at a time, as mundane as it sounds, and a week at a time, because that's really all we have any control over right now."