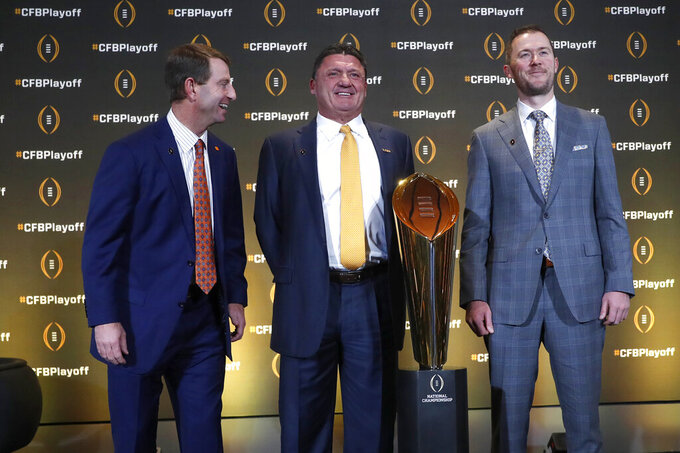 FILE - Clemson head coach Dabo Swinney, left, jokes with LSU head coach Ed Orgeron and Oklahoma head coach Lincoln Riley, right, as they pose with the College Football Championship trophy during a news conference ahead for the College Football playoffs in Atlanta, in this Thursday, Dec. 12, 2019, file photo. The College Football Playoff would expand from four to 12 teams, with six spots reserved for the highest ranked conference champions, under a proposal that will be considered next week by the league commissioners who manage the postseason system. A 12-team playoff would also include six at-large selections and no limit on how many teams can come from any one conference, a person familiar with announcement told The Associated Press on Thursday, June 10, 2021. The person spoke on condition of anonymity because the CFP has not yet released details. (AP Photo/John Bazemore, File)

A new College Football Playoff with triple the number of teams involved could bring in three times as much money to the conferences and schools that share the wealth.

The television rights for a proposed 12-team playoff could be worth about $1.9 billion annually, according to projections from Navigate Research, which consults with professional sports leagues and college conferences.

The Chicago-based company said ticket sales and sponsorship deals that currently account for about 15% of College Football Playoff revenue could push the total takeaway to more than $2 billion per year.

ESPN's current deal with the CFP pays about $470 million per year. ESPN has separate contracts with the Rose, Sugar and Orange bowls that up the network's total layout to more than $600 million annually to be the television home of college football's most important postseason games.

The Power Five conference’s get most of that revenue. According to the most recent figures available from 2019-20 season, the Big Ten, Big 12, Atlantic Coast Conference, Pac-12 and Southeastern Conference received $67 million each from the CFP. The other five FBS conferences shared $92 million.

How revenue would be distributed in a new model was not part of the detailed proposal the CFP unveiled Thursday. The 12-team model is at least three steps away from final approval from the university presidents and chancellors who oversee the CFP.

And it could be six seasons away from being implemented.

The current TV contract with ESPN runs through the 2025-26 season. Until then the CFP cannot take its new format to market. If expansion comes before the contract ends, a deal will have to be struck between ESPN and the CFP.

“We’re supportive of our partners at the College Football Playoff as they look toward expansion and seek even more opportunities to grow the passion and excitement for the sport and this signature championship event,” the network said Friday in a statement to AP.

The current format provides ESPN with three playoff games per season, two semifinals and a championship game, plus the rights to four other marquee bowl games that have no bearing on the national championship.

While viewership for the CFP has never matched the record levels reached when the playoff made its debut after the 2014 regular season, it is still arguably ESPN’s most valuable property.

Even this past season, when Alabama’s blowout victory against Ohio State on Jan. 11 was the least watched title game in the seven-year history of the CFP at 18.7 million viewers, the three playoff games still drew the largest audience for any cable network (an average of 19.1 million per game) since the previous year’s CFP.

Navigate’s projections are derived using the media rights value increases in recent deals made by the NFL, NHL, Southeastern Conference and other sport properties. Those deals increased the average value per viewer to $10.40, according to Navigate.

Assuming TV viewership increases by 25% each round of the playoff until the national Championship, which is in line with most seasons, Navigate estimated total viewers for all rounds of a 12-team CFP would be 183 million.