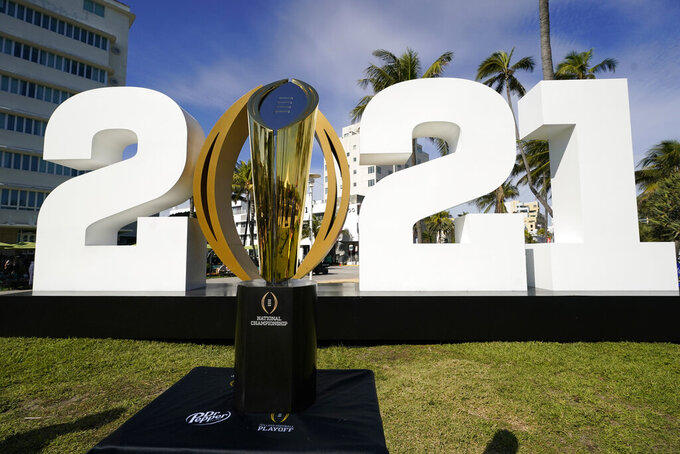 A plan to expand the College Football Playoff stalled Wednesday when the college sports administrators who oversee the postseason system were unable to reach consensus on whether to grow the postseason format from four to 12 teams.

The 10 major college conference commissioners and Notre Dame’s athletic director who make up the CFP management committee met to share feedback from their members and address concerns about the expansion proposal that was unveiled in June.

Among the issues: the number of teams. Hancock said an eight-team format was part of the discussions Wednesday.

The meeting in the Dallas area, which was attended in person by some of the participants and virtually by others, was prelude to a session in Chicago next week that was supposed to include the CFP board of managers.

The board is comprised of university presidents and chancellors representing each conference. The board has final say in all matters related to the playoff and there was hope the management committee would bring the presidents a recommendation to approve a format change.

Instead, the management committee will reconvene Tuesday, with the presidents joining via Zoom.

“There won't be a vote next week,” Hancock said. “Next week will be, I'll call it an informational meeting. It's complicated.”

Hancock added: “We have time.”

When the process first began, the 2023 season seemed like the soonest an expansion plan could be implemented.

After the latest meeting, Hancock talked about 2024.

The management committee and presidents routinely meet at the site of the College Football Playoff national championship game to discuss the state of the CFP. This season's game will be held on Jan. 10 in Indianapolis.

Since the public rollout of the 12-team playoff plan, there have been concerns raised about components of the format, including the possibility of increasing the number of games in a season required to play for a championship to as many as 17.

There were also questions about the impact subsequent conference realignment could have on a new version of the CFP.

In July, the Southeastern Conference invited Texas and Oklahoma to leave the Big 12 and join the powerhouse league in 2025 after the Big 12's current television contracts expire.

The Big 12 responded by inviting American Athletic Conference members Houston, Cincinnati and Central Florida to join the league along with BYU, which is a football independent that also competes in the West Coast Conference.

Pac-12 Commissioner George Kliavkoff stepped into the job on July 1, and Big Ten Commissioner Kevin Warren took over in January 2020, a year after the subcommittee was created.

Both have publicly supported CFP expansion, but stopped short of endorsing the 12-team proposal.

Jim Phillips took over as ACC commissioner in February and has been not publicly backed any type of expansion.

Hancock downplayed the idea that the new Power Five commissioners were responsible for tapping the brakes on expansion.

“Anytime you talk about a format discussion, there are lots of details," Hancock said. “The working group knew this and the full group did, too.”

Hancock said the committee is still sorting through issues related to the involvement of bowl games, media rights and number of teams in the field.

He insisted that doubling back to talk about an eight-team format should not be viewed as a setback.

“It's one of the details that has to be discussed,” Hancock said. “Eight was discussed today. There certainly was not unanimous support for it.”

Asked whether there was any support for it, Hancock said: “I don't want to get into details.”