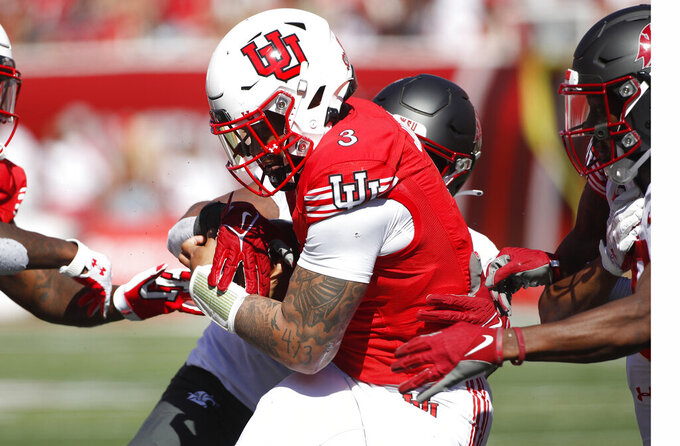 Utah quarterback Ja'Quinden Jackson (3) has the ball stripped from him by Washington State linebacker Travion Brown (B) at the goal line in the second half, of an NCAA college football game Saturday, Sept. 25, 2021, in Salt Lake City. (AP Photo/George Frey)

BERKELEY, Calif. (AP) — Chase Garbers is on the cusp of breaking California legend Joe Kapp’s record for career rushing yards by a quarterback. Garbers is also about to slip past Aaron Rodgers on the Golden Bears' list for touchdown passes.

There hasn’t been much else to celebrate for coach Justin Wilcox’s team through the first month of the season.

The Bears (1-3, 0-1 Pac-12) head into Saturday’s game against Washington State (1-3, 0-2) having lost three of four, including their Pac-12 opener in Washington last week. California’s lone win so far came against FCS Sacramento State.

Garbers leads the Pac-12 in completions (93) and is second in passing yards (1,093) to go with seven touchdowns. He’s passed for more than 300 yards in two of Cal’s first four games, something he did twice previously in his first three seasons in Berkeley.

“Chase is playing the best football of his career, and I think he can play even better,” Wilcox said. “In the past three weeks Chase has thrown the ball downfield and in the intermediate range more successfully than he has in the past. It’s great to see him make those. I still think there’s a handful of plays where he could take the next step.”

Garbers has been almost as effective running as he has passing. He’s carried 33 times for 177 yards and a pair of touchdowns. For his career, Garbers’ 895 rushing yards are 36 shy of Kapp’s record of 931.

“I’m just doing whatever makes the offense successful,” said Garbers, who needs three touchdown passes to move ahead of Rodgers (43) on the Bears' all-time list.

Washington State coach Nick Rolovich isn’t even sure who he’ll have at quarterback for Saturday’s game at Memorial Stadium.

Jayden de Laura began the season as the starter but hasn’t played since a leg injury two weeks ago against Southern California. Jarrett Guarantano played in last week’s 24-13 loss in Utah but was sacked seven times and had trouble moving the offense consistently.

IT’S BEEN A WHILE

Saturday will be the first time Cal and Washington State have played since 2019. The two teams were scheduled to face one another last year in Pullman, Washington, but the game was canceled two hours before kickoff due to COVID-19 protocols within the Bears’ program.

“It was a little frustrating, but given the time and where we were as a country, where we are in the Bay Area community, it was the right decision,” Garbers said. “Looking forward to playing them this Saturday and making up for 2020.”

One of Garbers’ favorite receivers over the previous three seasons has been Nikko Remigio. But Remigio, who had a 99-yard kickoff return for a touchdown against Sacramento State, came out of the Washington game with an unknown injury and his status for Saturday is uncertain. If Remigio can’t go, Kekoa Crawford could replace him as Garbers’ go-to receiver. Crawford had eight catches for 107 yards in the loss to the Huskies.

Washington State has injury concerns of its own. Leading rusher Max Borghi is questionable after suffering an arm injury against Utah. “It could have been a lot worse,” Rolovich said.

NO SPARK IN DEFENSE

Cal’s defense had been one of the team’s strengths in previous seasons but that hasn’t been the case this year. A big reason has been a lack of turnovers and sacks. The Bears have three interceptions, one fumble recovery and seven sacks through four games. They’re also allowing opponents to convert nearly 50% on third down.

“We haven’t been up to the standard where we’ve been in the past,” Wilcox said. “There’s moments, but in order to play good defense you can’t do it 60 out of 75 plays. You have to hit a higher clip than that.”