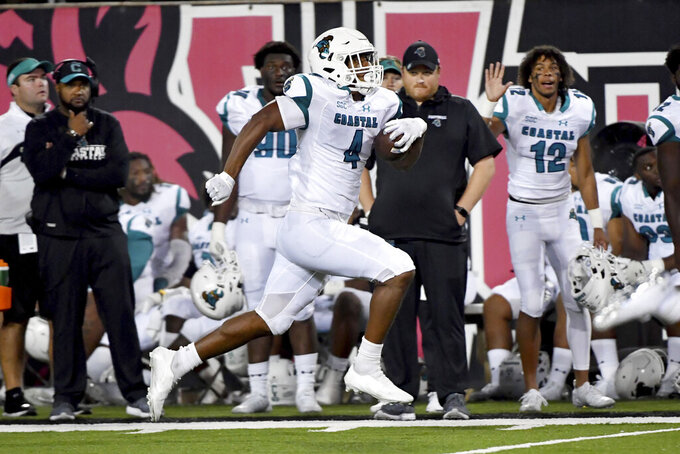 Line: Coastal Carolina by 4 1/2, according to FanDuel Sportsbook.

A win by Coastal Carolina allows them to remain as the only undefeated team in the conference's East Division. However, an upset for Appalachian State would pull the Mountaineers into a tie with Coastal Carolina and Troy and give them a key tiebreaker against the Chanticleers.

Coastal Carolina WR Jaivon Heiligh and TE Isaiah Likely vs. Appalachian State's secondary: Heiligh and Likely are both big-play threats, with each averaging more than 19 yards per catch. Heiligh is averaging 95.5 yards receiving per game and Likely 85.5 yards per game. Likely has twice as many touchdowns (eight) as Heiligh. They present a formidable challenge for a Mountaineers secondary which has traditionally been one of the best in the Sun Belt.

Appalachian State: WR Thomas Hennigan: A second-team Academic All-American in 2020, Hennigan ranks No. 2 in school history with 207 career catches and needs two more to break Andrew Peacock's record of 208. He ranks No. 3 in receptions among active FBS players.

Coastal Carolina: QB Grayson McCall. He is having another great season, having thrown for 1,478 yards with 14 touchdowns and one interception. He turned in his best statistical game of the season against Arkansas State in the team’s last outing on Oct. 7, throwing for 365 yards and four touchdowns.