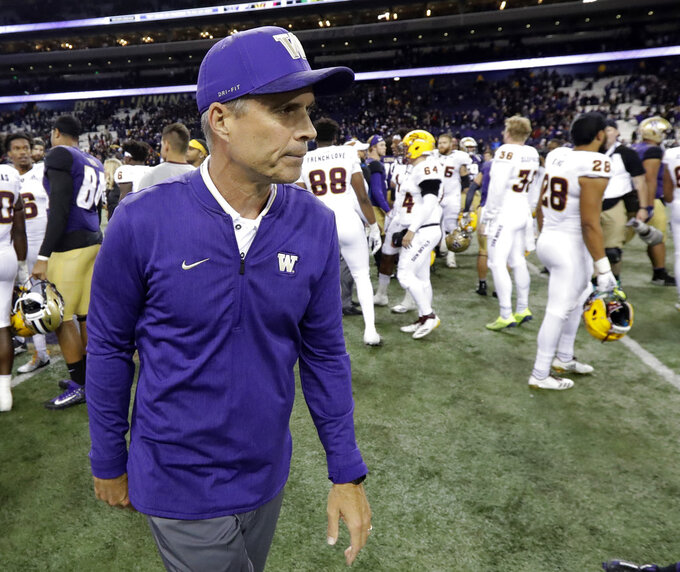 FILE - In this Saturday, Sept. 22, 2018, file photo, Washington head coach Chris Petersen walks off the field following an NCAA college football game against Arizona State in Seattle. If the Pac-12 wants to maximize its already damaged hopes of playing for a national championship No. 7 Washington needs to beat No. 17 Oregon on Saturday. (AP Photo/Ted S. Warren, File)

If the Pac-12 wants to maximize its damaged hopes of placing a team in the College Football Playoff, No. 7 Washington needs to beat No. 17 Oregon on Saturday.

The Huskies (5-1, 3-0) and Ducks (4-1, 1-1) meet in Eugene, Oregon, in a game that could go a long way to determining which team wins the Pac-12 North. After years of dominance by the Ducks, the Huskies flipped the rivalry the last two seasons, winning both games by a combined 108-24.

The Ducks' lone loss this season was a heart-breaking giveaway to Stanford. The Huskies have not lost since the opener against Auburn in Atlanta.

The best either team can do is "12-1 Pac-12 champion," but Washington's resume would look much better than Oregon's. The Ducks, thanks to Texas A&M bailing on a series, were stuck with one of the weakest nonconference schedules in the country. They also, by luck of the draw, have a Pac-12 schedule that has neither Southern California nor No. 19 Colorado. Good for racking up wins, but not necessarily for impressing the selection committee.

The Huskies, meanwhile, host unbeaten Colorado next week and have already won at Utah. The Auburn game was a loss, but traveling cross-country and playing a Top 25 team (for now) in its backyard is probably better than beating up a cupcake at home — which is all the Ducks have to show. The Huskies could also get a little boost from their win over BYU if the Cougars finish out the season strong.

Colorado is the only unbeaten team in the Pac-12 but, again, the schedule gods did the Buffaloes no favors. Rival Colorado State is mediocre at best and their big nonconference opponent, Nebraska, is in the midst of a historically bad season. Colorado probably needs to run the table to get serious playoff consideration, and it would probably bolster the Buffs' case if Washington was as good as possible.

Many wanted to bury the Pac-12 as soon as the Huskies lost to Auburn. That was premature. Even now there are enough twists and turns possible to pave the way for the conference to put its champion in the playoff — but the chances are much better if that champion is Washington.

Will this be the week Tua Tagovialoa throws his first fourth-quarter pass? ... ALABAMA 56-24.

Tigers will need to conjure up the turnover magic they had during a 5-0 start to keep up with the Bulldogs ... GEORGIA 28-17.

Much talk about the Buckeyes' leaky defense, but the running game has been spotty, too ... OHIO STATE 45-20.

On Saturday, the Fighting Irish will play their second-to-last home game of the season ... NOTRE DAME 42-17.

After a big victory, the Longhorns better beware of improving Bears ... TEXAS 41-21.

The winner brushes off its playoff hopes ... MICHIGAN 28-17

Hurricanes are still working that Turnover Chain, with a plus-five margin and 14 takeaways ... MIAMI 34-24.

No. 19 Colorado (plus 7) at Southern California

Can Tigers' stalled offense find some traction against the worst run defense in the SEC? ... AUBURN 27-7, BEST BET.

Gamecocks expect to have QB Jake Bentley (left knee) back in the starting lineup ... TEXAS A&M 27-21.

Mississippi (minus 6½) at Arkansas — @WhiteCitrus—

Rebels and Razorbacks have played a lot of wild games lately; Arkansas has won four straight and six of eight, average margin 34-29 ... ARKANSAS 34-29.

Duke (plus 3) at Georgia Tech — @russomatty