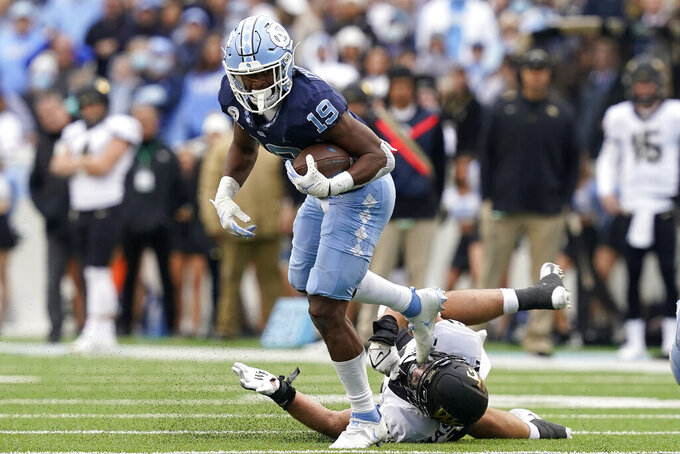 —Roshaun Johnson, Idaho, scored a school-record six TDs and ran for 174 yards in a 42-24 win over Southern Utah.

—Marcis Floyd, Murray State, returned an interception for a TD and returned a 2-point conversion attempt for two points in a 32-27 win over Tennessee Tech.

—Cameron Ward, Incarnate Word, passed for 610 yards and seven TDs, including a 24-yarder to Robert Ferrel with 25 seconds remaining, in a 55-52 win over Louisiana.

—Ren Hefley, Presbyterian, threw for 544 yards and seven TDs in a 65-55 loss to Valparaiso.

—Isaiah Ifanse, Montana State, ran for 217 yards and a TD in a 23-20 win over Eastern Washington.

—Steven Jones, Appalachian State, returned two of his three three interceptions for TDs in a 48-14 win over Arkansas State.

—Bailey Zappe, Western Kentucky, threw four TD passes and ran for a fifth in a 48-2 win over Middle Tennessee,

Purdue coach Jeff Brohm already had a reputation for running trick plays — and for leading his unranked team to upsets of top-5 opponents.

His Boilermakers added to that legacy against Michigan State.

Aidan O’Connell matched his career high by throwing three touchdown passes — including one on a reverse, flea-flicker screen pass to Jackson Anthrop — and Purdue toppled a Big Ten giant for the second time this season, beating the No. 5 Spartans 40-29 and leaving the conference without an unbeaten team.

For Brohm, exotic gadget plays have been a regular feature even before he arrived on Purdue’s campus. In fact, his innovative play-calling was one reason the Boilermakers hired him from Western Kentucky after the 2016 season.

This time, the beautifully executed gimmick — O’Connell handed off to Anthrop on an end-around, who gave it to receiver Milton Wright on a reverse, who pitched it back to O’Connell, who tossed a screen to Anthrop — resulted in a 39-yard touchdown that set the stage for something bigger.

6_Interceptions by Austin Peay in its 42-26 win over Eastern Illinois to break the school record.

20_Straight losses by Arizona before beating Cal 10-3. The streak was a school record and the longest in the FBS.

For the second straight year, Wake Forest couldn’t protect a big second-half lead at North Carolina. This time, though, it likely cost the 10th-ranked Demon Deacons any chance of playing their way deeper into the College Football Playoff race.

Chandler’s big day included a 50-yard breakaway run with 1:12 left to make it 58-48. That was the final blow for the Tar Heels in rallying from a huge third-quarter deficit to beat the Demon Deacons for the second straight year, following a 21-point comeback last year by erasing a 45-27 deficit with 7:38 left in the third.