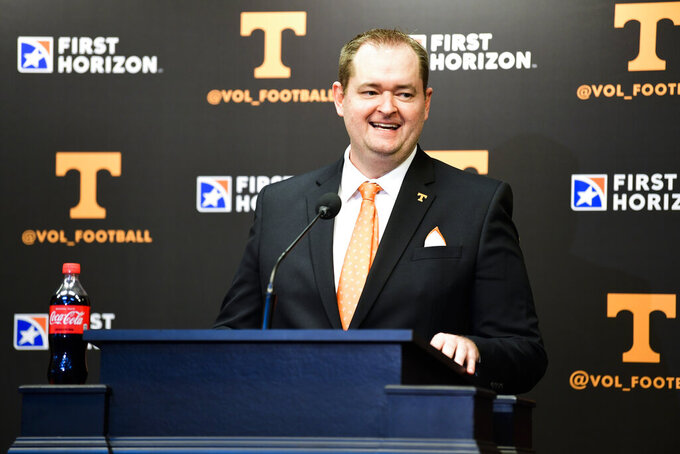 While the NFL's abysmal hiring practices have attracted plenty of well-earned condemnation, let's not forget the college game.

The big schools aren't doing any better when it comes to giving Black coaches a chance.

Even after a year of jarring social upheaval and demands for racial justice, none of the Power Five schools hired an African-American head coach for the first time since 2015.

There were seven openings.

All were filled by white coaches.

The Caucasian sweep was completed this week when Tennessee introduced Josh Heupel to salvage its dumpster fire of a program.

Looking beyond the most prominent schools, the situation doesn't get any better. With only one vacancy remaining (Central Florida), the number of Black head coaches in the 130-member Football Bowl Subdivision has dipped from a miniscule 13 to an even punier 11 heading into 2021 season.

That is simply unacceptable in a sport where Blacks make up about half of the players.

But college athletics seems largely unwilling to make any sort of significant changes to become more inclusive on the sideline.

If anything, college football is heading in the wrong direction. .The sport had a high of 19 Black head coaches during the 2011 season, but the numbers have dipped significantly in the decade since then. As we reported a year ago in a similarly bleak report, there are few Blacks in the important coordinator positions, either.

Three Black head coaches were fired during or shortly after the 2020 season: Vanderbilt’s Derek Mason, Arizona’s Kevin Sumlin and Lovie Smith of Illinois. The only Black coach hired by an FBS school was Charles Huff, an Alabama assistant who landed the top job at Marshall.

“I really thought there would be more of an upswing of individuals having an opportunity,” said Sean Frazier, the athletic director at Northern Illinois.

Especially after last summer, when college players took on a prominent role in protests against the centuries-old racism that still plagues our society. Coaches such as Alabama's Nick Saban even joined the wave of marches in support of Black Lives Matter.

“I was surprised, based on what happened to George Floyd and Breonna Taylor and all the things that happened recently, that there wasn't more of a conscious effort, an intentional effort, to give everyone an opportunity," Frazier said.

Instead, we had Arkansas State turning to Butch Jones, who washed out at Tennessee more than three years ago. And Louisiana-Monroe hiring 64-year-old Terry Bowden, whose last coaching job produced one winning season in seven years at Akron.

Frazier is one of the few ADs of color at an FBS school. The Huskies are also among the handful with a Black coach, Thomas Hammock.

There should be far more schools following their example.

“When you take a look at participation rates for the colleges and the pros, clearly the majority of them are Black and brown athletes,” Frazier said. “You would think that those playing the sport would automatically matriculate into coaching and administration.”

But that's not happening, certainly not at the highest levels.

Check out the Southeastern Conference, the nation's most dominant football league, covering a footprint of states that have the largest percentage of Black population.

Over the last four offseasons, the SEC has hired 13 new coaches — including three schools (Arkansas, Mississippi State and Tennessee) that have made two coaching changes in that short span.

Not one minority coach in the bunch.

The reason is fairly obvious: whites still hold nearly all positions of power and influence, from college presidents to athletic directors to big-money boosters.

They seem intent on keeping the head coaching jobs largely in the hands of those that look like them.

Frazier said it's imperative that schools and — perhaps even more importantly — the search firms that play a huge role in the hiring process spend a lot more time really getting to know the top Black assistants and keep them in the loop for the best jobs.

No one is asking for a guaranteed promotion.

But all deserve an equal opportunity.

“I would think a diverse pool of candidates gives you the best chance to be successful,” said Frazier, who is leading efforts to bring more diversity to the administrative ranks. "For some reason, that's getting lost in translation.

“We know there are qualified African American and minority candidates available for these spots,” he went on. “These are people that understand the game of football. But there's got to be an intentionality to the process if you want to get the best people. You've got to go out there and really search to get the best candidates.”

Maryland coach Mike Locksley, one of the few Blacks leading a Power Five program, has helped launch the National Coalition of Minority Football Coaches in hopes of expanding opportunities for those of color.

During a recent appearance on ESPN's “Outside The Lines,” Locksley suggested the group may have to borrow tactics used so successfully by political organizer Stacey Abrams to help the Democrats win the presidential race and two U.S. Senate seats in Georgia.

He said social media and other outlets should be used to give a campaign-like boost to the top Black candidates. He said it may time to call on big-money sponsors to exert some real pressure on those making the hiring decisions.

"We may have to take a page out of Stacey Abrams' book of campaigning and doing a great job of making sure that we get behind and drum up support for all these qualified minority coaches," Locksley said. “They're not hiring coaches anymore. They're electing them."

It's a daunting challenge, as the latest hiring season just proved.

Nothing will change significantly until those running both the NFL and the college game have a significant change of heart.