Column: Meyer will not coach in college again. Believe it 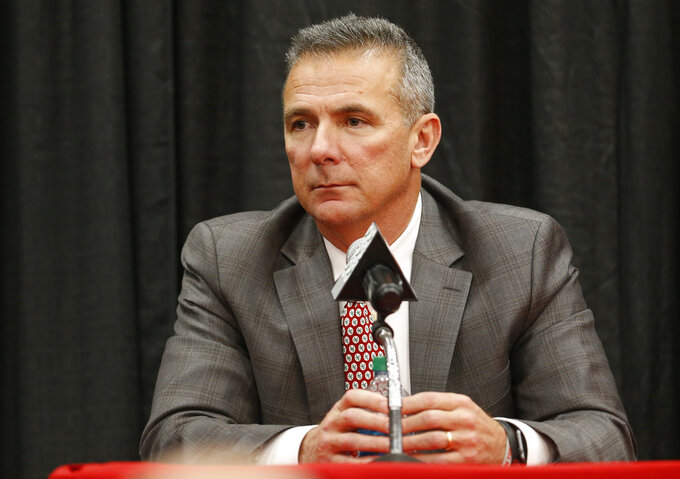 After leading Utah to an unbeaten season in 2004, Urban Meyer had a choice to make. He could become the coach at Notre Dame — a dream job, he once called it — or at Florida.

Meyer picked Florida because the Gators were better positioned to win national championships. He won two with the Gators.

After a year out of coaching, the Ohio State job opened — another dream job for the Ohio native who grew up a Buckeyes fan. He stepped into that gig, won another national championship and went 82-9 over seven seasons before announcing on Tuesday he would retire at 54 after coaching the Buckeyes in the Rose Bowl on Jan. 1.

"I believe I will not coach again," Meyer said.

Here is why you should believe him: Meyer's career has been a steady ascent, from Bowling Green for two years to Utah for two years to Florida for six years to Ohio State. Each job has been better than the one before it.

Fans, sports writers and talkers love to debate whether this coaching job is better than that job. Why would a coach leave this school for that school? Not every coach fits perfectly into every situation, though Meyer could probably fit anywhere. But he will never find a better fit than Ohio State because there is no better college job than Ohio State. And nothing about Meyer suggests he would be willing to accept anything less.

Among all the traditional powers, none has been better at maintaining a high level of success than Ohio State. Since 1960, Ohio State has had two losing seasons. Since 1993, Ohio State has 19 10-win seasons. Before Nick Saban, Alabama was down. Oklahoma had its dark days between Barry Switzer and Bob Stoops. Southern California pre- and post-Pete Carroll has struggled to find the right formula. Notre Dame between Lou Holtz and Brian Kelly was a mess.

Day's biggest challenge is not screwing up a good thing.

"Starting a program and fixing something that's struggling is much easier to me than maintaining," said Mack Brown, who at 67 is returning to coaching with North Carolina after 16 years as Texas coach. "When we won 10 games at Texas it wasn't enough."

For Brown and new Kansas coach and former LSU coach Les Miles, two former national champions in their 60s, just getting back in the game was enough. They both seem to welcome the lower expectations. When Steve Spurrier returned to college football from a failed stint in the NFL, he landed at South Carolina and was thrilled to — as he would so often say — accomplish things that had never been done before at the school. Gamecocks fans were giddy about the 10-win seasons Florida fans were complaining about at the end of Spurrier's time there.

A second-tier job with less pressure could be just what Meyer needs to continue coaching with a cyst on his brain that causes severe headaches and makes it difficult for an emotional guy to do a high-stress job.

"The style of coaching I've done for 33 years is very intense, very demanding. I tried to delegate more and CEO more and the product started to feel ... I didn't feel I was doing right by our players and by (athletic director) Gene (Smith)," Meyer said.

Only a school with legitimate national championship aspirations could entice Meyer. That list is short. Even shorter is the list of schools that could allow him to have anything close to Ohio State-level success.

Notre Dame? Meyer already knows the limitations in South Bend that kept him away the first time.

A lot of things would also have to fall into place for one of those few elite jobs to open just as Meyer is getting the itch to coach again, assuming he does. Think of everything that had to happen for Meyer to end up at Ohio State. What are the chances something like that could happen again?

Coaches coach and often do so well past retirement age. Meyer is 11 years away from that, so of course it is easy to expect him back on the sideline again. But to do so, Meyer would have to take a step back for the first time in his head coaching career.

Unless he goes to the NFL.