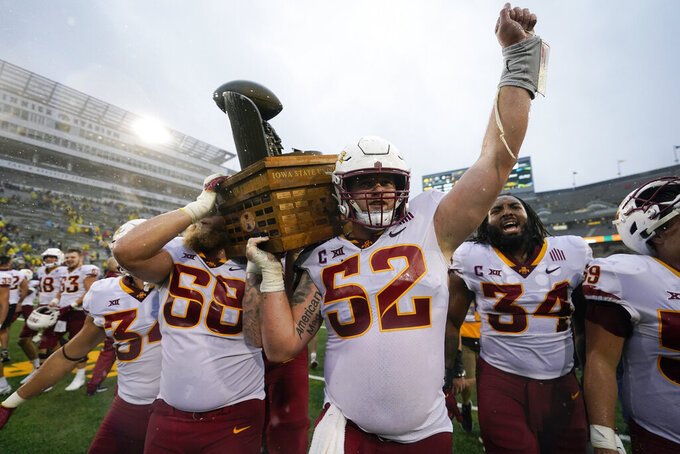 Line: Iowa State by 18 1/2, according to FanDuel Sportsbook.

Iowa State is coming off its CyHawk Game win over Iowa and is a week away from its Big 12 opener against defending conference champion and 17th-ranked Baylor. The Cyclones can't allow this to be a trap game. Ohio, which lost at Penn State last week, is playing back-to-back road games against Power Five opponents for the first time since 2016.

Ohio WR James Bostic vs. Iowa State secondary. The 6-foot-3, 229-pound Bostic caught only five balls in his first season with the Bobcats. Now he's a go-to receiver, averaging better than 18 yards on his team-high nine receptions. The Cyclones held Iowa to 92 yards passing, but that can be attributed more to the Hawkeyes' ineptitude. Iowa State gave up passes of 30, 29 and 41 yards to Southeast Missouri State two weeks ago

Ohio: FS Tariq Drake played 80 snaps against Florida Atlantic and 70 against Penn State, and coach Tim Albin said that's too many. It would be asking a lot for him to play so many a third week in a row, especially against a physical Iowa State offense.

Iowa State: LB Colby Reeder is in his first year with the Cyclones after transferring from Delaware but his seventh in college football because of a medical hardship and the COVID-19 year. He is the Big 12 newcomer of the week after recording an interception, a tackle for loss to go with three other stops and two quarterback hurries against Iowa.

The Cyclones are on a five-game home win streak and look to start 3-0 for the first time since 2012. ... ISU WR Xavier Hutchinson already has 19 catches for 226 yards and his four receiving touchdowns are most in program history in the first two games. ... Ohio is among 12 teams that have yet to commit a turnover. ... The Bobcats' five sacks against Penn State were its most against a Power Five opponent since they had the same number against Kansas in 2017.