Day: No. 3 Ohio St will be 'shorthanded' for Michigan State 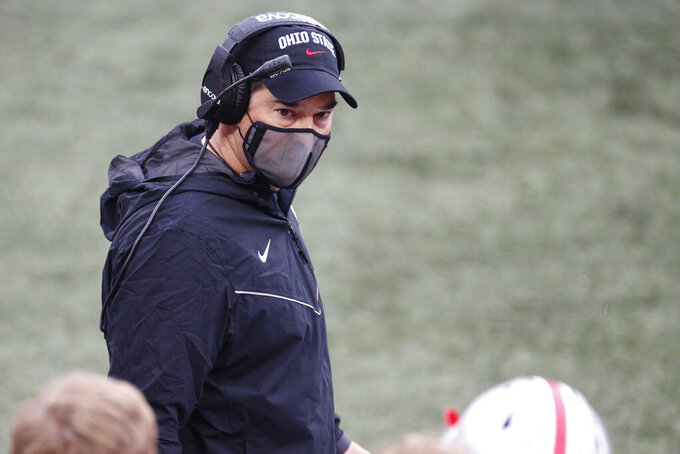 COLUMBUS, Ohio (AP) — No. 3 Ohio State will be “a little shorthanded” because of a COVID-19 outbreak but continues to practice ahead of its scheduled game at Michigan State, coach Ryan Day said Thursday.

So far, so good, this week for Ohio State, which voluntarily canceled its game at Illinois last week because of a spike in positive tests among its 170 players and staff in Columbus.

There were no details on which players might be missing for Saturday's game in East Lansing — the program will issue a list of unavailable players Friday — but Day will for sure be staying at home after a positive test last week.

“It's been a tough, tough week,” Day said on his weekly radio show, the only media interview of the week for him. “It’s certainly been a frustrating week. But I’m resting comfortably.”

Day will be convalescing at home Saturday, watching the game on TV like everybody else.

"It will probably be the hardest three hours of my life,” he said.

Players and staff will be tested at about 8 p.m. Friday before getting on the plane for a game Ohio State (4-0) must get in to log the minimum of six needed to be eligible for a Big Ten title.

That means the Buckeyes also must play next week's regular-season finale against Michigan, which because of positive tests had to suspend football activities and scrap this week's game against Maryland.

While the Big Ten requires a minimum of six games for title eligibility, there is no such threshold for the College Football Playoff. Ohio State is No. 4 in that ranking this week.

Day said the toughest part for everybody in the program has been all the stopping and starting.

“I just think the emotional toll it takes,” he said. "To say just 'It's OK, we're just going to get over it' isn't fair. We've had to just continually get over the disappointments, these stops, these starts.

“To go win a football game at any level, but certainly in college football and at Ohio State, you have to get yourself emotionally ready to play any game. And when those games are taken away, it's hard to create that momentum again."

Standing in for Day on Saturday will be defensive line coach Larry Johnson, who has been on the staff since 2014. The 68-year-old assistant talked about the challenges of coaching and cajoling players virtually much of the time these days.

“The Zoom is tough,” Johnson said. “You can give information, but you can't give a feel of the passion of the information. You want to see guys' eyes and how they react. It's tough to do that when you're showing videotape and talking to the guys (on Zoom). Sometimes I think I'm talking to myself.”