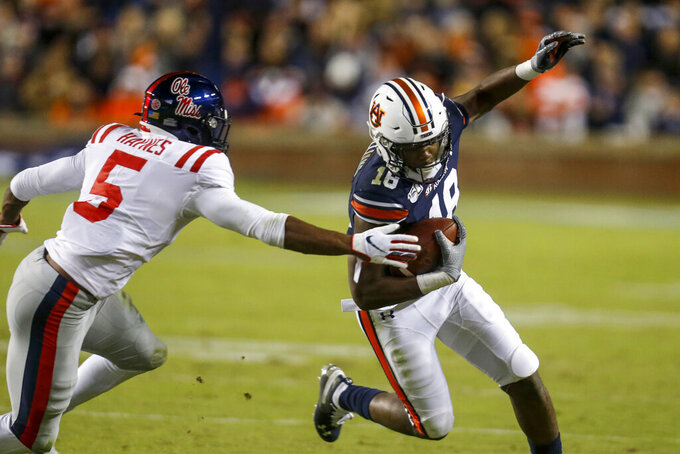 Auburn wide receiver Seth Williams (18) tries to get away from Mississippi defensive back Jon Haynes (5) during the second half of an NCAA college football game Saturday, Nov. 2, 2019, in Auburn, Ala. (AP Photo/Butch Dill)

Ole Miss carries a three-game skid into Saturday's matchup with winless New Mexico State (0-8), but the Rebels stayed close in each of their last two games because of their defense.

Defense kept Ole Miss competitive in a 20-14 loss at No. 12 Auburn last week and a 24-17 setback against Texas A&M a week earlier. Defense was the sole reason Ole Miss stayed close against Auburn.

"Defensively, the kids were flying around and gave us a chance to win the game," head coach Matt Luke said.

"We have shown signs of getting better," defensive coordinator Mike MacIntyre said. "I thought our kids have fought and competed."

Ole Miss' defense was among the worst in college football in 2018. Under MacIntyre, the group has vastly improved.

The Rebels have surrendered fewer than 400 yards of offense five times through nine games. They accomplished that feat one time last season — against Kent State.

A front seven featuring plenty of upperclassmen has been strong for most of the season, even after losing linebacker Mohamed Sanogo and defensive end Ryder Anderson to injuries.

A young secondary is improving after struggling mightily early in the season. The secondary allowed less than 225 yards passing twice in the last four games.

Through nine games, the defense has intercepted eight passes to exceed its 2018 total.

"I think they are playing better, playing tighter coverage and are around the ball more," MacIntyre said. "I think we have really improved. We just can't give up those big chunk plays."

A group comprised mostly of the same players who suffered through an abysmal 2018 season is budding with confidence and adopting a different mindset through the team's struggles on offense.

"We know the offense had trouble, but that is what we are here for," linebacker Jacquez Jones said. "If we have to win a game 3-0, then that is what we will do. Obviously, it didn't come down to that. We gave up some points and now we have to go back to work."

With No. 1 LSU and its high-flying offense still on the schedule, along with a road test at Mississippi State, the defense will need to continue its improved play as the offense continues to flounder without an identity.

"You always want to get better," MacIntyre said. "I think overall we have improved well, particularly against the run."