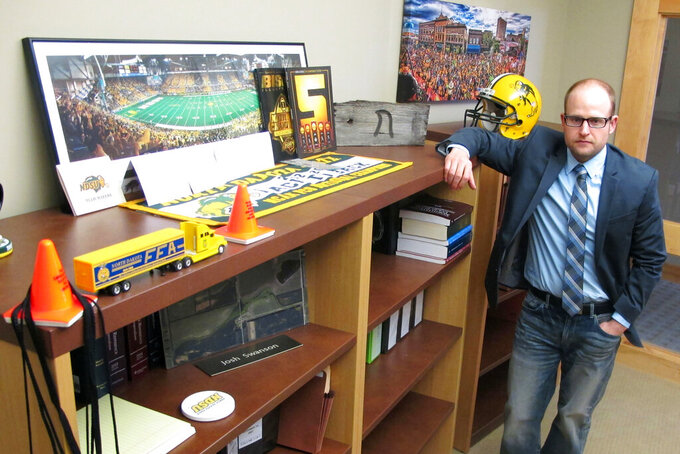 FILE - In this March 18, 2016, file photo, Fargo attorney Josh Swanson, of the Vogel Law Firm in Fargo, N.D., poses in his office next to a bookcase that contains numerous items of memorabilia from his alma mater North Dakota State University. NDSU seems to have perfected the art of reloading. The Bison are 12-0 and the top seed again in the FCS playoffs despite breaking in a new coach and a new quarterback this season. But with all their winning, seven of the last eight championships, is it all starting to get a little routine in Fargo? (AP Photo/Dave Kolpack, File)

FARGO, N.D. (AP) — It's only natural to ask two questions of a North Dakota State team that has won seven of the last eight Football Championship Subdivision titles and garnered the No. 1 seed again this year after blowing out nearly every opponent despite having a new coach and freshman quarterback at the helm.

Is it starting to get a little routine in Fargo? Does management think it's time to move up to the Football Bowl Subdivision and face tougher competition?

The answers are yes and no.

While university president Dean Bresciani, athletic director Matt Larsen and Bison Football Players Association members say they haven't heard anyone clamoring to make the move to the upper echelon of college football, they haven't heard much cheering from fans in the second halves this season either. That's because many of them are gone by that time.

Bresciani said many of the second-half no-shows are students and people with short attention spans, adding that Alabama has tried unsuccessfully to deal with a similar problem. Larsen acknowledged he is bothered by the mass exodus and doesn't understand why people who shell out big bucks for tickets don't want to get their money's worth.

Some former Bison football players have even been spotted heading to the exits before the fourth quarter.

However, none of them see all this as a symbol of boredom that comes with sustained success. They note the 19,000-seat Fargodome sells out for every game, the booster club continues to thrive even though its members are asked to open their wallets wider and Bison nation turns Frisco, Texas, into South Fargo, North Dakota, for FCS championship games.

Bresciani puts it this way: Ticket-holders are “”satisfied with the product" and simply leaving early.

“I get it at some level," Larsen added. “But whether you are the second team or third string guy and you're working just as hard as the starter, to have people leave at halftime or the third quarter because they don't think it's worth watching, I struggle with that."

Josh Swanson, a North Dakota State alumnus and self-proclaimed “super fan” who hosts a game day radio show in Fargo called “Herd it Hear,” said the Bison dominance is beyond that of Alabama's in the FBS.

The school should “strike when the iron is hot” and advance to the next level, he said.

“Winning championships is great and the athletic department and the teams should be incredibly proud of that," Swanson said. “But I think North Dakota State could go into any Group of Five conference now and compete for a conference title and a spot in the Cotton Bowl. As a fan, I think that's something we should aspire to."

Bresciani said he believes most people interested in a move up are under the impression that North Dakota State would be playing schools from the Power Five conferences, like Alabama, rather than the Group of Five teams, like Boise State or Wyoming. He said the Bison, with a current athletic budget of about $25 million, could not find the revenue to compete with Power Five teams. Alabama's athletic revenue is about $177 million.

That would leave the Group of Five conferences, which does not sound appealing to the university leader who would have to get on board to make it work.

“I don't think anyone wants to see us play the University of Akron,” Bresciani said.

He noted that North Dakota State already is receiving a lot of national attention with wins over seven FBS schools — six of them Power Five teams — in the last decade. NDSU is also proud of making two appearances as the host school and one as the visiting school for ESPN's popular “College GameDay" show.

North Dakota Gov. Doug Burgum, a North Dakota State graduate and former Bison football cheerleader, said he loved attending the victories over the FBS teams, but added that Bison football is already a national brand because of the FCS titles, GameDay shows and numerous players who have advanced to the NFL.

“You never say never, but it’s a fun ride with NDSU being competitive nationally every year in FCS," Burgum said. “Ask me again after the Bison play the University of Oregon next fall in Eugene.”

The Bison, who received a bye in the first round of the FCS playoffs, are 28-point favorites for Saturday's second-round game against Nicholls State at the Fargodome. Asked about the powerful Bison offense led by freshman sensation Trey Lance, who has not thrown an interception in college, Colonels coach Tim Rebowe compared them to a Power Five team.

“Ï think we saw a little bit of one when we played this team called Kansas State earlier in the year," Rebowe said of the Wildcats, whose first-year coach Chris Klieman was leading the Bison to another national title at this time last year.