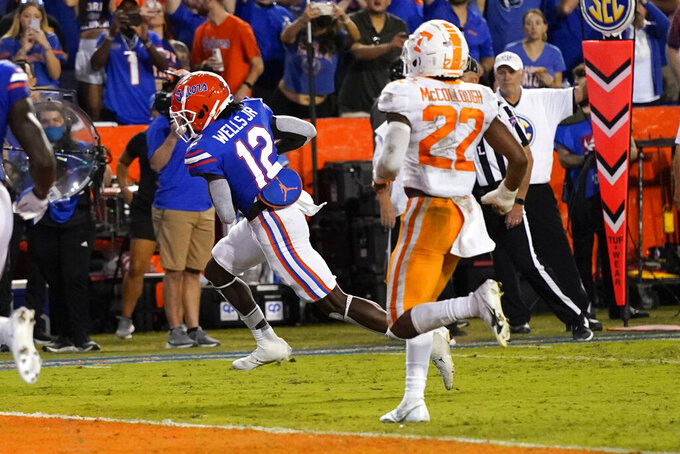 Florida wide receiver Rick Wells (12) runs past Tennessee defensive back Jaylen McCollough (22) on his way to a touchdown off a 9-yard pass play during the second half of an NCAA college football game, Saturday, Sept. 25, 2021, in Gainesville, Fla. (AP Photo/John Raoux)

GAINESVILLE, Fla. (AP) — Emory Jones did something no Florida quarterback has done since Tim Tebow. With backup Anthony Richardson cleared to return next week, Jones might have a tough time accomplishing the feat again.

Jones had two touchdown passes to go with a career-high 144 yards rushing, leading the 11th-ranked Gators to a 38-14 victory over Tennessee on Saturday night and extending nearly two decades of dominance in the series.

“I'm definitely just warming up, honestly,” Jones said. “Everything I'm doing I've done before. All my teammates, they've seen me do all this and more before. They are confident in me and trust me and believe in me."

Florida (3-1, 1-1 Southeastern Conference) won its fifth straight and 16th in 17 years in a series that used to go a long way toward deciding the Eastern Division. First-year Tennessee coach Josh Heupel is trying to get it back there.

The second half showed he’s still got a way to go. The Gators, who bounced back from a gut-wrenching loss against top-ranked Alabama in the Swamp a week ago, scored on consecutive drives to start the third quarter and turned a three-point game into comfortable lead. Jones was at his best during those possessions.

“I think you see him really settling down," Florida coach Dan Mullen said.

With Richardson still nursing a strained right hamstring, Jones completed three straight passes that set up a trick-play touchdown. Jones lateraled to Trent Whittemore, who found Kemore Gamble in the end zone for a 13-yard score. It was Florida’s first trick-play TD in three years.

Jones ran for 43 yards on Florida’s next drive and capped it with a 9-yard TD pass to Rick Wells.

Jones completed 21 of 27 passes for 209 yards on the night and ran 15 times, with a long of 49 yards. He became Florida's first QB to top 200 yards passing and 100 yards rushing since Tebow in 2009 against Florida State. Tebow accomplished the feat four times in four seasons.

“He’s got more to come," Florida running back Dameon Pierce said. "That’s just him scratching the surface out there.”

Jones finished without a turnover for the first time this season. He will go back to sharing snaps with Richardson next week. Mullen said Richardson is “100% now" and will practice full speed beginning Monday.

“We're not waiting (to clear him) until the MRI on Friday,” Mullen said.

The Volunteers (2-2, 0-1) played much better in the first half, with Herndon Hooker and a big-play offense keeping the Gators off-balance. Hooker connected on TD passes of 47 and 75 yards.

But Tennessee failed to score after the break.

“Extremely disappointed the second half unfolded the way it did,” said Heupel, who pointed to dropped passes and penalties as the biggest culprits.

The biggest one came on a fourth-and-5 play with Tennessee trailing 24-14 in the third. Jimmy Calloway dropped a perfect pass on a drag route with plenty of open field in front of him. Florida scored eight plays later to start to pull away.

Hooker was sacked early in the fourth and knocked out of the game. He tried to leave the field without any assistance after trainers helped him up, but he dropped back to his knees before reaching the sideline. Joe Milton replaced him.

Hooker completed 13 of 23 passes for 221 yards and two touchdowns. He and the Vols seemed rattled several times by the crowd of 88,478.

Florida, which entered the game as the No. 2 rushing team in the country, finished with 283 yards on the ground. Mullen had his most balanced attack of the season, with 222 yards passing and 505 yards total.

Tennessee came into the game allowing just 54.3 yards rushing a game. Florida topped that in the first quarter.

Tennessee: The Volunteers appear headed in the right direction under Heupel, although he acknowledged there's still a clear gap between the programs.

Florida: The Gators gave up too many big plays early. If they’re going to run the table in the SEC and get back to the league title game, they’re going to have to shore up that part of their defense. Getting standout cornerback Kaiir Elam back would be a start. He missed the game with a sprained right knee.

Tennessee plays at Missouri next Saturday. The Vols have won two in a row and four of six.

Florida plays at Kentucky next Saturday. The Wildcats last beat the Gators in Lexington, Kentucky, in 1986. Florida has won 16 straight there.