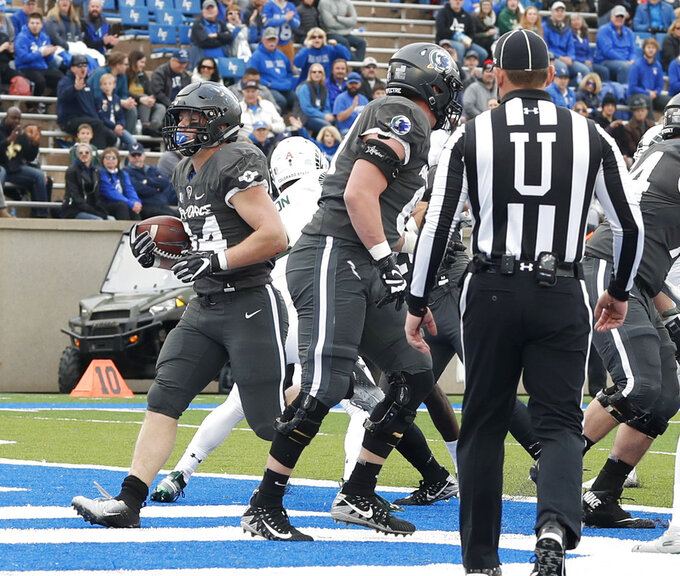 Turns out, the junior fullback had quite the appetite.

Fagan rushed for 260 yards, the third-most in Air Force history, and linebacker Kyle Floyd thwarted a late drive with an interception to help the Falcons hold off Colorado State 27-19 on Thursday.

Fagan gouged the Colorado State defense with run after run up the middle, including an early 3-yard score. He finished 15 yards shy of the school record set by Chad Hall in 2007.

In all, Fagan carried the ball 34 times, averaging 7.6 per carry. His longest run was a 56-yard gallop.

"I still look at the numbers and don't believe it," Fagan said.

The Rams tried to adjust to Fagan by overloading one side. And when they did, the Falcons countered by sending him the other way.

Kadin Remsberg sealed the win with a late score as the Falcons (5-7, 3-5 Mountain West) won their third straight over Colorado State (3-9, 2-6).

Rams receiver Preston Williams turned in a big afternoon with 12 catches for 248 yards and three scores. His third TD brought the Rams to within 20-19 with 9:53 remaining, but Wyatt Bryan's game-tying extra point was blocked by defensive lineman Ben Harris. Bryan also missed an extra point earlier in the game.

The Falcons went on a time-consuming drive, 11-play drive that culminated in Remsberg's score, giving Air Force a 27-19 lead.

Colorado State was on the move when Floyd stepped in front of a K.J. Carta-Samuels pass and allowed Air Force to secure the Ram-Falcon Trophy.

"Huge for me, but I think it was even bigger for the team," Floyd said.

Collin Hill started the game for the Rams and threw two TD passes. After an interception in the third quarter, he was checked out by the doctors and the team elected to keep him out. Carta-Samuels took over.

Colorado State's defense came up with a goal-line stand in the third quarter. Hill and the offense took over at the 1 and had a promising drive going until Air Force safety Jeremy Fejedelem picked off a pass. The Falcons turned it into a 39-yard field goal that extended their lead to 20-13.

Colorado State: The Rams haven't won at Falcon Stadium since 2002.

Air Force: The Falcons still have a slim chance at making a bowl should not enough teams reach the six-win mark. They are among the leaders in the Academic Progress Rate, which puts them at the top of the list.

Colorado State played on Thanksgiving for the first time since 1978. The Rams are 15-25-2 all-time on the holiday.

For Air Force, playing on turkey day is rare, with this game marking just the third occasion. The team is now 1-2.

The Air Force falcon named Aurora attended the game Thursday. She's expected to make a full recovery from injuries she suffered at West Point during a prank before the annual football game between the service academies earlier this month.

With a defender close by, Air Force receiver Marcus Bennett tipped a pass to himself in the end zone for a 16-yard score. A thing of beauty — or so QB Donald Hammond III was informed.

"I was on the ground," Hammond cracked.

Williams finished with 1,345 yards receiving — third-most in school history for a season. His 96 receptions are tied for second-most.

Asked if he will return next season to Fort Collins, the junior simply said: "I haven't decided. I want to talk things over with my family first."

Fagan wound up 3 yards shy of 1,000 yards rushing for the season.

"It's better to get the win than that personal stuff," Fagan said.

Colorado State: Gear up for next season, when the Rams are tentatively scheduled to open the season on Aug. 31 against Colorado.

Air Force: A very remote chance at a bowl bid.