Fires turn Nevada into vagabonds before opener at Cal 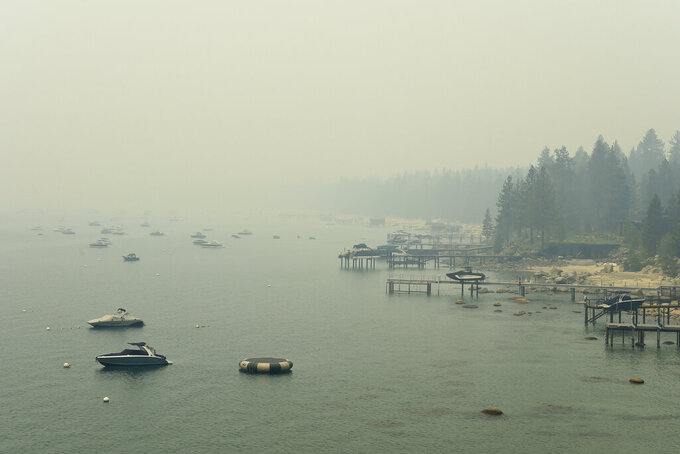 Smoke from Caldor Fire in California covers Lake Tahoe in the Incline, Nev., area on Tuesday, Aug. 24, 2021. A California fire that gutted hundreds of homes advanced toward Lake Tahoe on Wednesday as thousands of firefighters tried to box in the flames and tourists who hoped to boat or swim found themselves looking at thick yellow haze instead of alpine scenery. (Andy Barron/The Reno Gazette-Journal via AP)

BERKELEY, Calif. (AP) — By the time Nevada kicks off its season opener against California on Saturday night, the Wolf Pack will have been on an odyssey.

With smoke from wildfires in Northern California making practice nearly impossible at home in Reno, coach Jay Norvell's team has searched far and wide to find safe places to work out.

They have practiced indoors on a basketball court on campus, at the Reno Convention Center, made a couple of trips to the Bay Area to practice at Stanford and even held a walkthrough in a hotel parking garage.

In all, the Wolf Pack will have practiced at seven venues and traveled about 2,000 miles from the start of training camp until after the season opener.

“We just had to do it,” Norvell said. “We don’t have an indoor facility here at the university and we just had to really travel to find fresh air that’s safe for our athletes to practice.”

The Wolf Pack began camp outdoors for a couple of practices before moving inside to a basketball court.

“For some of you guys that remember the old ‘North Dallas Forty’ movie, it’s like Nick Nolte on a basketball court," Norvell said. “That’s what we were doing. It wasn’t anything that correlated to us being able to play the game at full speed outside. We just had no choice but to leave.”

They then left for two weeks at Stanford, where they were able to hold scrimmages and work on real fields before returning home and finding high school fields far enough away from the smoke to hold workouts. They even held a walkthrough in the parking structure at a hotel in Fremont.

They came back to the Bay Area early again this week for their final two practices before Saturday night's game at Cal.

“You’re playing cards, you’re doing rookie shows. You’re just around each other all the time,” he sad. “I think it’s been good. There’s no distractions out there. We’re just focusing on football. So I think it’s been overall good for us.”

The Wolf Pack bring back all 11 starters from an offense that ranked second in the Mountain West last season averaging 31 points per game. Strong leads the way after throwing 27 TD passes and only four interceptions last season when he was conference player of the year. He has plenty of help with an experienced line, receiver Romeo Doubs, tight end Cole Turner and backs Toa Taua and Devonte Lee.

Nevada gets an even bigger boost with the return of receiver Elijah Cooks, who sat out last season after leading the team with 76 catches for 926 yards and eight scores in 2019.

Strong grew up about an hour away from Cal in Vacaville and frequently made the trip to Memorial Stadium to cheer on players like Aaron Rodgers, Marshawn Lynch, DeSean Jackson and Jared Goff. Strong even attended camps at Cal and hoped to play there but never got recruited by the Bears after missing his senior season with a knee injury.

“We’d love to recruit everybody from Northern California,” Cal coach Justin Wilcox said. “It doesn’t always work out that way. We knew about him and there’s things that happen in recruiting each and every year. But he’s had a heck of a career and we know he’s going to be a great challenge.”

“Definitely a lot of familiarity,” defensive lineman Sam Hammond said. “We went against him for a couple of years so we know how he likes to operate. I’ve got a good feeling that the D-line is going to dominate as always.”

Cal holds a 32-6-1 edge in the all-time series but this will be just the third meeting in the past 25 seasons. Nevada won those other two, a 52-31 home win behind Colin Kaepernick in 2010 and a 31-24 victory two years later in the first game at a renovated Memorial Stadium.