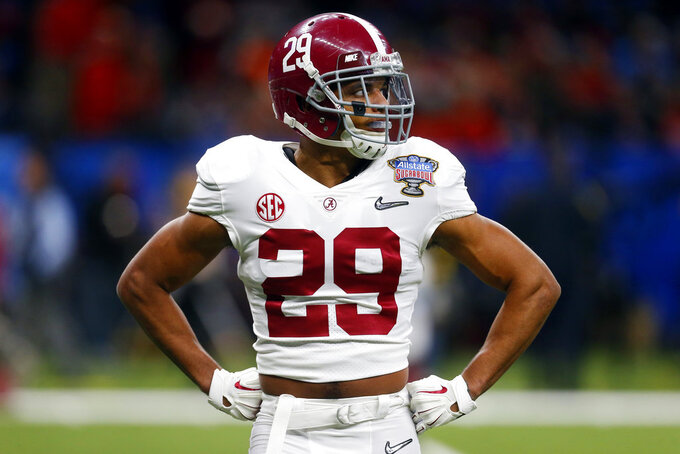 FILE- In this Monday, Jan. 1, 2018, file photo, Alabama defensive back Minkah Fitzpatrick (29) warms up before the Sugar Bowl NCAA college football game against Clemson in New Orleans. Georgia's quarterback Jake Fromm has shown the poise of a veteran all season, but Saban’s defenses have been known to fluster even experienced quarterbacks and Fitzpatrick is an extension of Saban on the field. (AP Photo/Butch Dill, File)

TUSCALOOSA, Ala. (AP) — National champion Alabama once again must replace a number of key players leaving early for the NFL draft, including All-America safety Minkah Fitzpatrick. Fitzpatrick, safety Ronnie Harrison and tailback Bo Scarbrough announced Thursday they're skipping their senior seasons. Crimson Tide coach Nick Saban says defensive tackle Da'Ron Payne is also entering the draft, and wide receiver Calvin Ridley already had announced his departure. Fitzpatrick, regarded as a potential top 10 pick, said it wasn't a tough call for him. "I think it was a pretty clear decision with my family and my coaches," he said. "I feel I played well enough to go high as I wanted to. I got a good grade from my coaches and the NFL. So it wasn't a difficult decision. It was a little bittersweet. I love the University of Alabama, made a lot of great friends, a lot of great relationships here inside the team and outside the team. It's going to be hard to leave. It's definitely been a whole lot of fun. I'm really happy I was given the opportunity to play here." Fitzpatrick, Ridley and Payne are projected as likely first-round draft picks. Harrison said he received a second-round grade from the College Advisory Committee. Scarbrough declined to say what feedback he got. Saban said Harrison and Scarbrough could graduate as early as May and Fitzpatrick could get his degree in August. Alabama has had 25 underclassmen enter the draft since 2009, and 14 of them have been first-rounders. Cornerback Marlon Humphrey was the only first-rounder among the three underclassmen to turn pro last season. Leading rusher Damien Harris has decided to return for his senior season, according to a report from AL.com, citing unnamed sources. Alabama's secondary will lose its normal starting lineup, though Deionte Thompson started both playoff games with an injury to senior safety Hootie Jones. Fitzpatrick is a unanimous All-American who won the Bednarik Award and Thorpe Award as the nation's top defensive player and defensive back, respectively. Harrison led the team in tackles and had three interceptions. Payne was a key run-stopper in the middle and also had an interception and touchdown catch in the semifinal win over Clemson. Scarbrough ran for 596 yards and eight touchdowns. Scarbrough appeared poised for a breakout year after finishing his sophomore season with big games, including a 180-yard performance against Washington in the playoff semifinals. It didn't happen but the 6-foot-2, 235-pounder said he still plans to finish his degree. "I mean no one can take a piece a paper away from me, so of course I'm going to get my degree," Scarbrough said. "That was my whole plan, coming to college and I wanted to major in criminal justice and be an FBI agent, and I'm going to pursue that dream." Saban said he looks forward to the day when these players return to watch Alabama from the sidelines, like a big group at Monday night's national title game against Georgia. "I can't say enough about the contributions these guys have made," Saban said. "It just seems like yesterday we were in their houses recruiting them. Time went by very quickly. But I can't tell you or them how much we appreciate the contributions they've made." ___ More AP college football: http://collegefootball.ap.org and https://twitter.com/AP_Top25