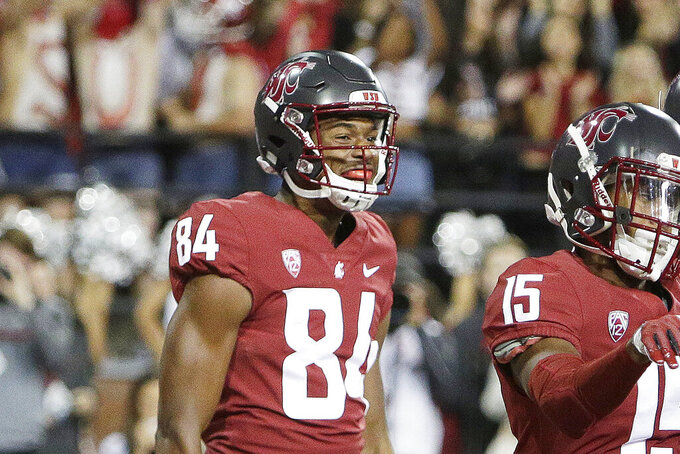 Washington State wide receiver Kassidy Woods (84) looks on as wide receiver Robert Lewis (15) celebrates his touchdown during the second half of an NCAA college football game against Eastern Washington in Pullman, Wash., on Sept. 15, 2018. Woods, a former football player for Washington State University, contends in a lawsuit, filed Friday Aug. 20, 2021, in federal court for the northern district of Texas in Dallas, that his civil rights were violated when he was kicked off the football team after complaining about potential exposure to COVID-19 and for joining an association of Black student-athletes. (AP Photo/Young Kwak)

SPOKANE, Wash. (AP) — A former Washington State player contends in a lawsuit that his civil rights were violated when he was kicked off the football team after complaining about potential exposure to COVID-19 and for joining an association of Black student-athletes.

Kassidy Woods, a wide receiver from Addison, Texas, filed the lawsuit on Aug. 20 in federal court in Dallas.

He contends his rights were violated by Washington State coach Nick Rolovich and by the Pullman-based university when he was kicked off the team last year. Woods seeks actual and punitive damages set by the court.

Woods entered the transfer portal last year and has landed at Northern Colorado.

“WSU Athletics is aware of the complaint and will not comment on any pending or on-going legal matter," the Washington State athletic department said in a statement Wednesday.

Woods, who is Black, said he was heavily recruited by former coach Mike Leach and in 2017 accepted a football scholarship He signed legal financial aid documents in accepting the offer.

Woods also cofounded the Black Student Association at WSU and was active in a variety of leadership roles, the lawsuit said.

Rolovich replaced Leach in January 2020, and the COVID-19 pandemic spread across the U.S. two months later, the lawsuit said.

“Unfortunately, the promised environment of campus as the “safest place” for athletes was a complete fabrication by Defendants,” the lawsuit said.

Players, many of whom were Black, began catching COVID-19, and Woods and other players began questioning the return to campus.

At the same time, protests were occurring across the country based on several high-profile cases of police brutality against Black people, the lawsuit said.

“A coalition of discussion between Black athletes formed around these ideas and questions,” the lawsuit said. "Ultimately, a group of Pac-12 athletes identified in a social and racial justice group by the name of “#WeAreUnited.”

In July 2020, Woods and another player met with Rolovich to discuss the #WeAreUnited movement, their concerns regarding the health risks associated with their athletic participation, and the apparent lack of planning or testing, among other concerns, the lawsuit said. Their worries were confirmed when 60 student-athletes at WSU came down with COVID-19, the lawsuit said.

On Aug. 1, 2020, Woods and Rolovich had an additional conversation about COVID-19 and Woods’ concerns for his own health. Woods told Rolovich that, due to his health concerns, he was going to opt out of the 2020 football season.

According to the court filings, Rolovich then immediately instructed Woods to clean out his locker and told Woods he could not be around the other players.

Woods subsequently entered the NCAA transfer portal. Woods was notified almost immediately by Washington State that his contract for athletic services would be terminated at the end of the fall semester.

Woods also contends breach of contract by Washington State under a binding agreement requiring Woods to provide athletic services to the school in exchange for certain benefits, including housing, food, and cash allowances.

Woods also contends the university violated the Civil Rights Act of 1964, which holds that no person in the United States shall, on the ground of race, color, or national origin, be subjected to discrimination under any program or activity receiving federal financial assistance.

Rolovich has also sparked controversy this year by initially saying he wouldn't get vaccinated against COVID-19. He has since said he will abide by the Washington governor's mandate that all university employees be vaccinated, with few exemptions. But he has not said if he has received a shot or sought an exemption.