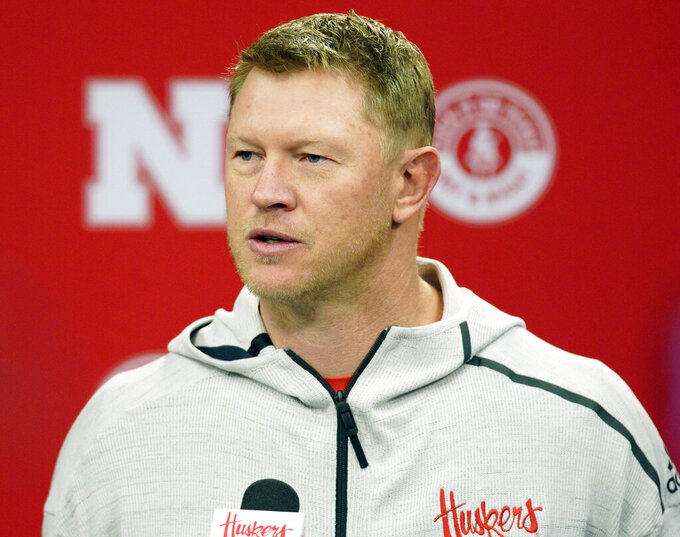 FILE - In this March 5, 2019, file photo, Nebraska NCAA college football coach Scott Frost answers a question during a news conference in Lincoln, Neb. Nebraska football coach Scott Frost and men's basketball coach Fred Hoiberg will donate a portion of their salaries to the athletic department's general operating fund to help offset revenue shortfalls because of the coronavirus pandemic. The athletic department said in a statement Thursday, June 18, 2020, the amount of the donations would be determined when the 2021 budget is closer to being finalized. Frost's salary is $5 million this year. Hoiberg is set to earn $3 million. (AP Photo/Nati Harnik, File)

The athletic department said Thursday the amount of the donations would be determined when the 2021 budget is closer to being finalized.

Frost's salary is $5 million this year. Hoiberg is set to earn $3 million.

Frost is in his third year as head coach. He grew up in Wood River and was the Cornhuskers' quarterback in 1996-97. His father played football for the Huskers; his mother was a standout on the track team and is in the school's athletic hall of fame.

“These are difficult times across our country and in college athletics, and Nebraska athletics is not immune to the financial crunch,” Frost said. “This athletic department has been so important to my family for several decades. Before I ever played or coached here, I was a Nebraska Cornhusker fan first. I wanted to do my small part to help ensure our athletic department and all of our teams have the necessary resources to compete for championships moving forward.”

Hoiberg is entering his second season at Nebraska. His parents are Nebraska graduates and his grandfather, Jerry Bush, was the Huskers’ men’s basketball coach from 1954-63.

“When I took this job, one of the things that stood out to me most about Nebraska was its complete commitment to the student-athlete, not just in football or men’s basketball, but in all sports,” Hoiberg said. “It is important to me to contribute to keeping Nebraska a leader in student-athlete support and services.”