Georgia Bulldogs planning to have fans between the hedges 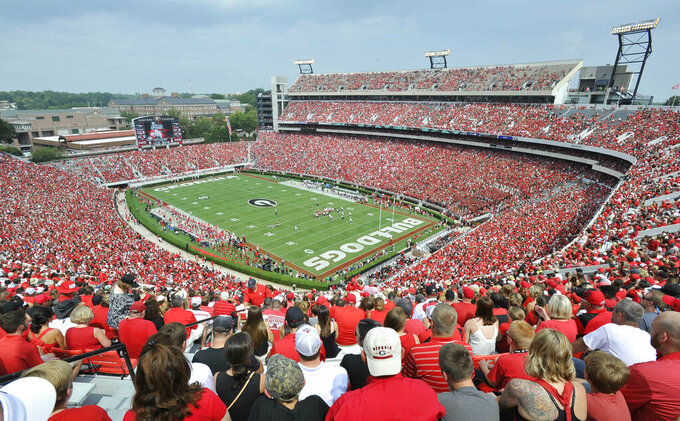 The Georgia Bulldog are planning to have fans between the hedges this season.

Mirroring other schools in the Southeastern Conference, the school announced a ticket plan Wednesday that would allow 20-25% capacity at 92,746-seat Sanford Stadium.

Athletic director Greg McGarity stressed that all arrangements are tentative amid the coronavirus pandemic.

“I hope this is the plan we end up with,” he said. “But as we know, things change rapidly. We could wind up where we don't have fans."

The Bulldogs are offering single-game tickets in hopes of accommodating as many season-ticket holders as possible for an SEC-only schedule that includes home games against Auburn, Tennessee, Mississippi State and Vanderbilt.

Fans will be assigned mostly to four-seat blocs presumably comprised of people from the same household, family members or close friends. Social distancing will be maintained between those groupings, spreading fans throughout the massive stadium.

McGarity jokingly said it would be comparable to the school's G-Day spring practice game if it was held on a rainy day.

“It's going to look very sporadic,” he said.

Georgia also plans to set aside 3,000 tickets for the student body.

Fans will be required to wear masks to enter the stadium and while moving through the concourses. They can remove the coverings at their seats.

While Alabama already announced tailgating will not be allowed outside its stadium, Georgia has not yet made a decision on that beloved football tradition.

Georgia's announcement came even as the state has become a hot spot for the pandemic. The number of cases is approaching 250,000, with more than 4,700 deaths.

The athletic director noted that Georgia's first home game is not until Oct. 3, when the Bulldogs are set to host bitter rival Auburn.

“We're not even out of August yet,” McGarity said. “There's plenty of time through the whole month of September to evaluate things and pivot as necessary."

Georgia's hopes of playing before fans — or even having a season — might come down to the actions of its student body. Classes resume on campus this week, setting up a scenario that already has led to outbreaks at other schools.

“What's the general student population going to do? That's up for grabs,” McGarity said. “We expect to see some spikes. No one would be shocked by that.”

Those fans who choose not to attend games this fall will be eligible for a refund on all donations and season ticket purchases, while retaining their preferred status for 2021.

Tickets will cost $150 per game, providing a much-needed boost in revenue even though the costs of staging a game will be significant given the cleaning costs and other safety measures.

“There's no question the expenses are going to be rather high to make sure this happens,” McGarity said.