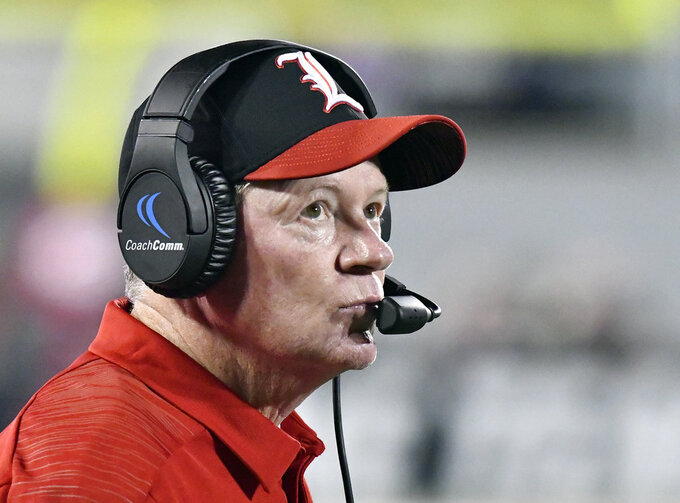 FILE - In this Friday, Oct. 5, 2018, file photo, Louisville head coach Bobby Petrino watches a replay on the video board during the second half of an NCAA college football game against Georgia Tech in Louisville, Ky. The Cardinals (2-4) have lost three straight and are winless in Atlantic Coast Conference competition heading into Saturday’s game at Boston College. (AP Photo/Timothy D. Easley, File) 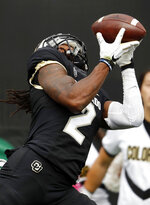 Now that the college football season has reached its midway point, the title chases in each of the conferences are starting to come into focus.

This week should clear things up even more.

No. 2 Georgia visits No. 13 LSU in a Southeastern Conference interdivisional matchup that could impact each division race. No. 15 Wisconsin travels to No. 12 Michigan in a potential preview of the Big Ten championship game. No. 19 Colorado puts its perfect record on the line at Southern California in a game that could help determine the Pac-12 South champion, while No. 17 Oregon hosts No. 7 Washington in a game pitting two of the Pac-12 North's top teams.

Here's a rundown of some things to know heading into the season's seventh weekend.

LSU's loss at Florida last week prevented this from being a matchup of unbeatens, but Georgia still is putting its perfect record on the line in one of the nation's most hostile road environments.

This is the first of four straight games Georgia will play against teams currently ranked in the Top 25. Georgia follows up this game with matchups against No. 14 Florida, No. 18 Kentucky and No. 21 Auburn.

This marks the first time these two SEC rivals have faced off since 2013. They haven't met in Tiger Stadium since 2008.

Shenault is the nation's leading receiver and plays for an undefeated Power Five team, yet he remains something of an afterthought in a Heisman conversation that has been dominated by quarterbacks such as Alabama's Tua Tagovailoa and Ohio State's Dwayne Haskins thus far.

Part of the problem is that Colorado has played a relatively soft schedule, due to Nebraska and UCLA having down seasons.

The Buffaloes should get more attention the next couple of weeks as they visit Southern California on Saturday and No. 7 Washington on Oct. 20. Those games should provide more of a showcase for Shenault, who scored four touchdowns (two rushing, two receiving) in a 28-21 victory over Arizona State last week.

15 - Tennessee has lost its last 15 games against the SEC West and hasn't beaten a West Division team since knocking off Mississippi in 2010. The Vols also have lost 11 straight SEC games overall, a slide that began in November 2016. The Vols will try to end that skid when they visit Auburn on Saturday.

15-1: Wisconsin's record in true road games during Paul Chryst's coaching tenure. The Badgers carry a 10-game road winning streak into Saturday's game at Michigan. Wisconsin's only road loss under Chryst was a 14-7 setback at Michigan in 2016 .

40 - Alabama's average margin of victory this season. Alabama is scoring 56 points per game to lead all Football Bowl Subdivision teams and is allowing 16 points per game.

322 - The number of career points for Notre Dame kicker Justin Yoon, making him the Fighting Irish's all-time leading scorer. Yoon set the record last week by passing running back Allen Pinkett, who scored 320 points (not including bowl games) from 1982-85.

No. 10 Central Florida at Memphis

They will meet again Saturday as the 10th-ranked Knights (5-0, 2-0 American) put their FBS-leading 18-game winning streak on the line at Memphis (4-2, 1-2). Although Memphis' offense isn't quite as explosive as it was last season, the home-field advantage could give the Tigers a reasonable shot at pulling the upset.

How far has Louisville fallen without 2016 Heisman Trophy winner and first-round draft pick Lamar Jackson? The Cardinals (2-4) have lost three straight and are winless in Atlantic Coast Conference competition heading into Saturday's game at Boston College.

The Cardinals are coming off a 66-31 shellacking against Georgia Tech . That followed a 28-24 loss to Florida State in which Louisville's decision to pass rather than attempting to run down the clock resulted in an interception that led to FSU's winning touchdown.

Petrino still owns an impressive 36-22 record in his second stint at Louisville. His contract also includes a hefty buyout that makes him likely to return next season even if Louisville finishes below .500 this year.

But his recent results should have Louisville fans feeling frustrated.