Georgia tries to improve playoff hopes with win vs. Auburn 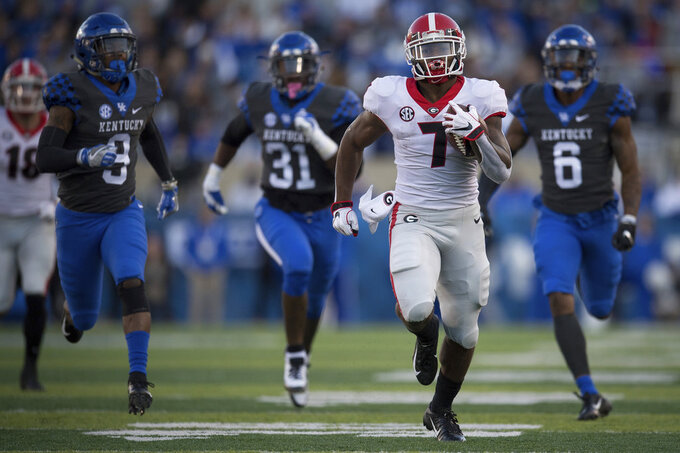 Georgia running back D'Andre Swift (7) runs for a touchdown during the second half an NCAA college football game against Kentucky in Lexington, Ky., Saturday, Nov. 3, 2018. (AP Photo/Bryan Woolston)

Here are some things to watch during Week 11 of the Southeastern Conference football season:

Alabama QB Tua Tagovailoa vs. Mississippi State's pass defense. Tagovailoa has established himself as the Heisman Trophy favorite after throwing 27 touchdowns and just one interception over his first nine games. The top-ranked Tide (No. 1 CFP) are averaging 51.3 points per game. Mississippi State's defense has been among the best in the nation, giving up just nine offensive touchdowns all season. The 18th-ranked Bulldogs (No. 16 CFP) are especially good at stopping the passing game: They've given up just 167.2 yards through the air per game, which ranks first in the SEC.

Kentucky is favored by six points at Tennessee, which is a risky play considering the Wildcats have lost 16 straight games in Knoxville. ... Florida is a six-point favorite at home against South Carolina, but the Gators haven't looked very good the past few weeks, losing their past two games by an average of 20 points. South Carolina has won two straight.

Georgia running back D'Andre Swift has rushed for over 100 yards in back-to-back games and had a career-high 156 yards last week in a 34-17 victory at Kentucky that enabled the Bulldogs to clinch the SEC East title. Swift had touchdown runs of 20 and 83 yards against Kentucky. Swift has rushed for 622 yards and has gained 6.3 yards per carry while teaming up with Elijah Holyfield in Georgia's backfield.