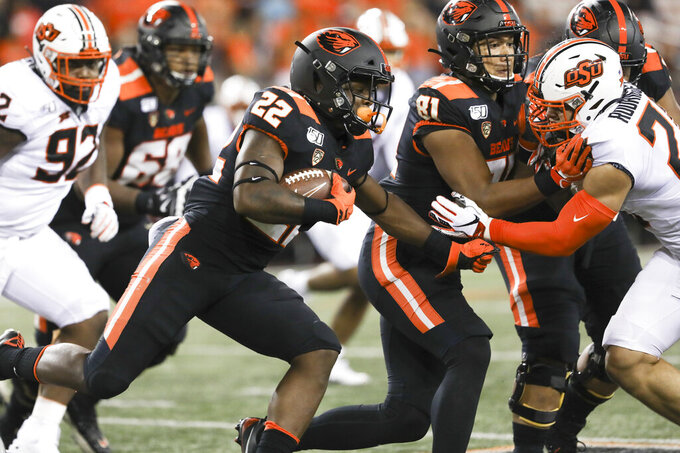 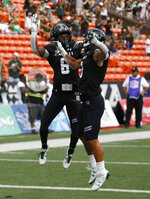 HONOLULU (AP) — Oregon State coach Jonathan Smith expected plenty of growth from his team coming off a 2-10 record last year and one game hasn't done anything to change those expectations.

The Beavers (0-1) will look to rebound from a season-opening 52-36 loss to Oklahoma State when they face Hawaii at Aloha Stadium on Saturday.

The Rainbow Warriors (1-0) are seeking their second win against a Pac-12 team in as many games. They survived a 45-38 shootout against Arizona two weeks ago and are coming off a bye week.

"These kids will respond, they're going to battle. One game won't define a season — we talked about that — it's always a big deal the first game because there's so much lead-up time, there's like six or eight months leading up to this first game, so yeah, it's a big thing, but it's a long season and it won't define us," Smith said.

The Beavers defense will face another prolific offense in Hawaii.

The Rainbow Warriors prefer to air it out, as evidenced by their 436 passing yards against Arizona.

"It's a different scheme, starting really with their pace of play," Smith said. "Oklahoma State wanted to get back on the ball and snap it and go; these guys aren't trying to do that. This is an effective offense, though. Yeah, they throw it, but they run it effectively, too — I think they ran it over 20 times against Arizona — so we've got to be able to defend both."

Hawaii coach Nick Rolovich, whose team is a 6 1/2-point favorite Saturday, said the Beavers will be a formidable opponent.

"They were in all (their) football games last year. They just weren't able to pull out as many wins as they wanted, but I think they're proven. I think they're on the right path and they're going to be as challenging as we could have asked for, to be honest with you, because they're extremely efficient offensively. They put you in a lot of binds, they're smart coaches, they set you up, they've got good receivers with speed and height and with the running back committee they've got, they can use three or four guys and not miss a beat," Rolovich said.

The Beavers made news during the summer of 2018 after Rolovich tweeted out photos of recruiting material that was mailed by Oregon State to the Hawaii campus and addressed to several players who were on the Rainbow Warriors roster. Oregon State self-reported the incident and received a secondary violation from the NCAA.

At his news conference Monday, Smith said the issue forced the program to audit its recruiting process but that the mishap is in past.

"We just looked into our protocol a ton of exactly how we're getting things out and we actually implemented some things so that that thing didn't take place again, so we've got a fail-safe of about two or three checks," Smith said.

Oregon State assistants Legi Suiaunoa (defensive line) and Kefense Hynson (wide receivers) and special teams coordinator Jake Cookus each spent time on the Hawaii coaching staff before joining the Beavers. Suiaunoa and Hynson were with the Rainbow Warriors for two seasons (2016-17) and were part of Rolovich's inaugural staff. Cookus oversaw the special teams for Hawaii under former coach Norm Chow in 2015.

Hawaii linebackers coach Mark Banker had two stints as an Oregon State assistant, including 12 seasons as defensive coordinator from 2003-14. Oregon State transfer Isaiah Tufaga made three starts at linebacker and appeared in nine games as a freshman for the Beavers in 2018 but must sit out this season due to transfer rules.

Oregon State has won the last four meetings against Hawaii and leads the series 7-3. The teams last met in 2014, when the Beavers won 38-30 at Aloha Stadium to improve to 5-3 against the Rainbow Warriors in Honolulu. Hawaii's last victory in the series came on Christmas Day 1999 — a 23-17 win over Oregon State in the Oahu Bowl. Smith was the starting quarterback for the Beavers in that game.