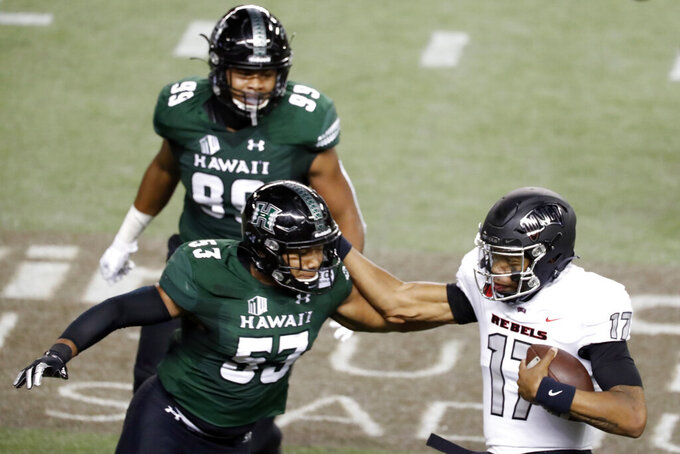 FILE - In this Dec. 12, 2020, file photo, UNLV quarterback Doug Brumfield (17) tries to get away from Hawaii linebacker Darius Muasau (53) during an NCAA college football game in Honolulu. Hawaii and Houston are in Texas to play in the New Mexico Bowl. The Christmas Eve game was moved to Frisco, Texas, because of COVID-19 travel restrictions in New Mexico. (AP Photo/Marco Garcia, File)

Hawaii will try to finish with a winning record for the third season in a row, something the Rainbows haven't done since 2001-04. The Cougars are trying to avoid consecutive losing seasons for the first time since 2000-02, a span that included going 0-11 in 2001. The only previous meeting between the teams was in the Hawaii Bowl on Christmas Day 2003, when the Rainbows beat the Cougars 54-48 in triple overtime and there was a brawl at midfield at the end of the game.

Hawaii dual-threat sophomore QB Chevan Cordeiro vs. Houston defense. Cordeiro has thrown for 1,947 yards with 11 touchdowns and is also the team's leading rusher with 450 yards and seven scores. The last Hawaii QB to lead the team in rushing was Michael Carter in 1991. The Cougars have played only one game the past 5 1/2 weeks, but in that game held Memphis to 310 total yards, 157 below the previous season average for the Tigers.

Hawaii: Sophomore LB Darius Muasau is the Mountain West Conference leader with 11.9 tackles per game, which is fifth among FBS players. He leads the nation with 7.9 solo tackles per game.

Houston: Junior QB Clayton Tune, the 14th quarterback in school history with 4,000 career yards passing, averages 302 total yards per game. Tune has completed 150 of 247 passes for 1,832 yards with 13 touchdowns and seven interceptions. He also has run for 269 yards with a team-high five rushing TDs.

The game was moved to Frisco, Texas, from its usual location in Albuquerque because of COVID-19 restrictions in New Mexico. ... Houston had two of its American Athletic Conference games canceled, while Hawaii was one of four Mountain West teams to play all its scheduled conference games. ... This is Hawaii's 14th bowl game, but only its third played outside of Hawaii (1992 Holiday Bowl and 2008 Sugar Bowl). ... First-year Rainbows coach Todd Graham has taken all five of his teams to bowl games. He is going for his 100th career victory in his 13th season overall, previously at Rice, Tulsa, Pitt and Arizona State. ... Houston is in its 28th bowl game. The Cougars have lost their last three.