Hawkeyes ramp up run going into rivalry game with Huskers 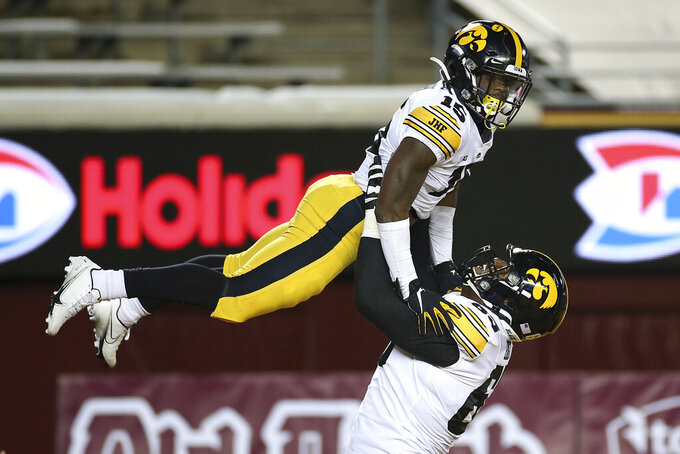 Physical offensive play has become synonymous with Iowa under Kirk Ferentz, yet only one of his previous 21 teams finished a season averaging 5 yards per rushing attempt.

The Hawkeyes are averaging 5.02 yards per carry through five games, better by nearly a yard from last season, and good enough for 212 yards per game during the three-game win streak they will carry into their meeting with border rival Nebraska on Friday.

“It all starts with the guys up front,” center Tyler Linderbaum said. “We’re doing a pretty good job executing these run plays. It’s just the mentality we have. We want to get this ground game going. In the few games in the past, we struggled. We put that on our shoulders to do a better job.”

Iowa (3-2) has averaged 267 rushing yards in the last four games of its five-game win streak against Nebraska (1-3).

“You got to play more physical than them on defense and you've got to get them out of their game plan, which is run the ball vertically down your throat,” Cornhuskers linebacker JoJo Domann said. “We've struggled with the stretch (play) in the past, so it’s really just the whole run game, being able to stop and adjust to anything that they’re giving us.”

Tyler Goodson had back-to-back 100-yard games against Michigan State and Minnesota before being held to 78 by Penn State. He's averaging a team-best 91 to rank fourth in the Big Ten.

"I think we’re really finding out who we are,” Goodson said. "We’re starting to play collectively, hitting on all cylinders.”

“Overall, being together as a unit, day in, day out, on the field and off the field, we’ve become really tight and close-knit,” Jackson said. “I feel like it’s paid off for us.”

Linderbaum has been the driving force in the trenches. He started all 13 games as a redshirt freshman and received All-Big Ten honorable mention from coaches and media. He's picked up where he left off.

"The level he’s competing at — his desire to compete, line up, and beat the person across from him — it’s as high as I’ve ever been around,” offensive coordinator Brian Ferentz said.

Linderbaum and his mates on Monday were named to the midseason honor roll for the Joe Moore Award, which is given to the nation’s top offensive line.

Last season, the Hawkeyes rushed for 170 yards or more in four games. This season, they’ve done it four times in in five games.

In the next two games they'll be going against two of the worst run defenses in the conference. Nebraska is allowing 223 yards per game and Illinois is giving up 195.

Until someone can stop the run, the Hawkeyes will keep bringing it.

“That’s our mentality,” Linderbaum said. “They know what we want to do. It comes down to execution and starting fast, so hopefully we can do that Friday.”