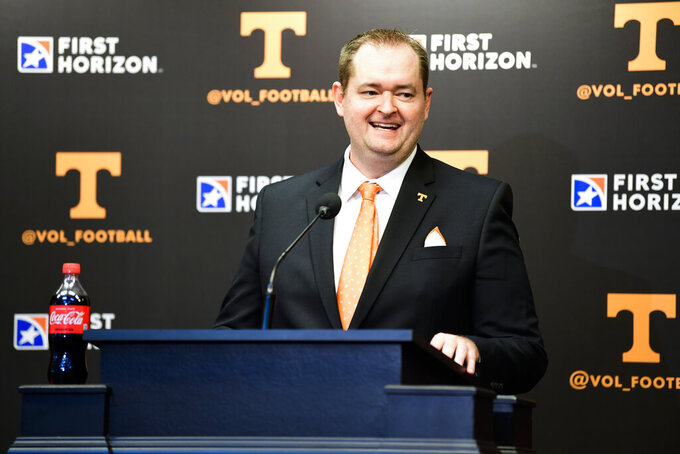 FILE — In this Jan. 27, 2021, file photo, Tennessee's new football coach, Josh Heupel, speaks during an introductory news conference in Knoxville, Tenn. The new operating speed for the Tennessee Volunteers is fast. Not as speedy as Heupel wants once the season starts, but pretty quick for April. Offensive linemen like Heupel's new offense because they're snapping the ball and lining back up again so fast they can see defensive linemen wearing down during drives. (Caitie McLekin/Knoxville News Sentinel via AP, Pool)

The new operating speed for the Tennessee Volunteers is fast. Not as speedy as new coach Josh Heupel wants once the season starts, but pretty quick for April.

Offensive linemen like Heupel's new offense because they're snapping the ball and lining up again fast enough they can see defensive linemen wearing down during drives.

“In the past, SEC teams would rotate a whole new D-line so you're six plays into a drive and they're bringing three fresh guys,” offensive lineman Cade Mays said. “In this offense, we don't give the defense the opportunity to sub and bring in that new package, so you really see them wearing down.”

Wide receivers are lining up wider and loving the chances to make more catches down the field. This is the third offense for senior Cedric Tillman, and he said the schemes of Tyson Helton and Jim Chaney were similar.

“This offense is real different,” Tillman said. “I'm excited for it. I'm adjusting well. I believe we're still trying to get the details me and my teammates ... I think it's going to be electric this year, and we're all looking forward to it.”

Tennessee wraps up spring practice Saturday with the Orange & White game and has plenty of room for improvement from last season. The Vols ranked 102nd nationally averaging 346.2 yards a game and 108th in the country scoring only 21.5 points a game while going 3-7 last season.

Heupel, hired Jan. 27 to replace Jeremy Pruitt after he and nine others were fired Jan. 18, went 28-8 at UCF, and his up-tempo, high-powered offense was a big reason why.

Heupel and his coaching staff started introducing this new scheme once hired. They've had 15 total practices, including three scrimmages capped by the spring game, to help the Volunteers understand the pace they want.

The Vols also will have time this summer and in fall practice to turn what they've been learning to muscle memory, allowing them to play even faster.

“Obviously, it's just tempo and having a really, just a high-powered offense at every level of the game,” offensive lineman Cooper Mays said. “It's just so intense and fast it's kind of hard to describe, but you guys will see it on game day.”

That also forces the Vols' defense to play faster. Defensive line coach Rodney Garner says his linemen are learning how to stay poised, play with confidence and communicate with each other.

Who will run this offense may not be decided until the opener Sept. 4 against Bowling Green.

Hendon Hooker, a graduate transfer from Virginia Tech, has the most experience of any quarterback on the roster. He started 15 of 25 games in four seasons at Virginia Tech, throwing for 2,894 yards and 22 touchdowns while running for 1,033 yards and 15 more TDs.

Hooker has rotated with Harrison Bailey and Brian Maurer.

Kaidon Salter, the sixth-best dual-threat quarterback in the nation by 247sports composite rankings, is suspended along with linebackers Martavius French and Aaron Willis and defensive lineman Isaac Washington after being arrested on misdemeanor charges.

Heupel says the Vols will keep getting more efficient.

“For being this early in the process, I love where we’re at,” Heupel said.