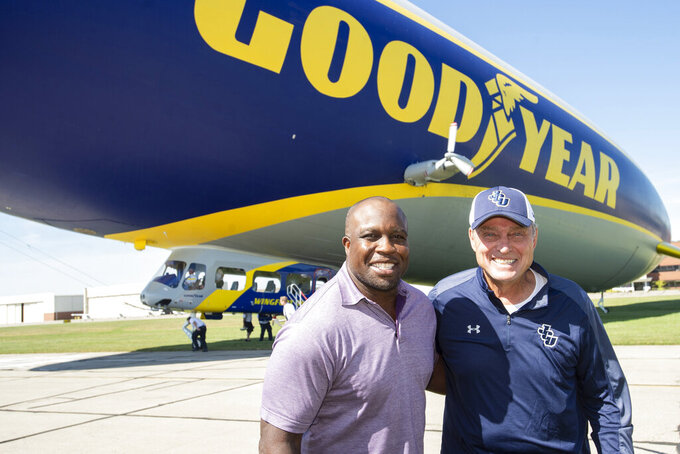 FILE - In this Friday, Sept. 27, 2019, file photo, College Football Hall of Fame inductee London Fletcher, left, and his high school and college coach Mike Moran pose following their surprise reunion and ride on the Goodyear Blimp in Cleveland. It's been an emotional whirlwind lately for Fletcher, who was enshrined last week in the Washington Redskins' Ring of Honor. He'll soon become a member of the College Football Hall of Fame — inducted along with Goodyear's iconic blimp, the first non-player or coach elected. (AP Photo/Phil Long, File)

From more than 1,000 feet above his hometown, Fletcher gazed out one of the Goodyear Blimp's gondola windows and memories flashed before him.

Below, he could see his childhood home on Giddings Road, where life was often difficult. Not far away near the southern shore of Lake Erie sits Villa Angela-St. Joseph, the high school where he starred as a linebacker and point guard on two state title basketball teams.

Fletcher, who played 16 seasons in the NFL for St. Louis, Buffalo and Washington, eventually soared over John Carroll University, his beloved alma mater where on this sunny final Friday in September a group of students stood on the school's football field and saluted their famous alum.

They held a sign in JCU's colors that said: "Congrats London."

"That was amazing," Fletcher said following his sentimental sky ride. "The surprise of a lifetime."

It's been an emotional whirlwind lately for Fletcher, who was enshrined last week in the Redskins' Ring of Honor. He'll soon become a member of the College Football Hall of Fame — inducted along with Goodyear's iconic blimp, the first non-player or coach elected.

"My fellow Hall of Famer," Fletcher said affectionately in describing the Akron, Ohio-based aircraft, whose connection to college football began in 1955 when it provided aerial TV coverage for the Rose Bowl. "Growing up in Northeast Ohio, you see the Goodyear Blimp all the time. You knew if the blimp was around, something big was about to happen. If you saw the blimp at a game, you knew it was a big game."

Goodyear arranged the above-ground trip on its famous 246-foot, 20,000-pound blimp for Fletcher, along with a reunion with the coach who convinced him football was his future.

He was joined on the tour by Mike Moran, who coached him in high school and college. Moran's addition for the journey above Cleveland was a surprise until just moments before takeoff.

As the giant blue-gold-and-gray colored blimp descended on one of the runways at Cuyahoga County Airport, Fletcher turned to discover that his friend and mentor would be accompanying him on his sentimental sky ride.

"How did you sneak up on me?" Fletcher said to Moran, who retired as John Carroll's basketball coach in 2017 after 25 years, but still heads the men's golf program.

"I'm going to be your pilot," Moran said, joking.

"Well, then I'm going to call my wife and tell her to up the insurance," Fletcher said, laughing.

The two men boarded for a trip back through their years together. For Fletcher, it was a chance to relive his inspiring story.

"All the odds were stacked against me," he said.

Fletcher accepted a basketball scholarship at St. Francis (Pa.) before returning after one year to Cleveland to be closer with his family "because there was a lot of stuff going on in my house, some substance abuse issues." He enrolled at John Carroll, paying his own way, and wanted to keep playing basketball. But the 5-foot-10, 245-pounder's rough style was more suited for open spaces than tight gymnasiums.

"He played basketball like he played football," Moran said, smiling. "You talk about in-your-face defense, he invented it. When he touched the basketball it was first and goal. This was a guy who was born to play football."

Fletcher took Moran's advice and made football a priority. He dominated at the Division III level — he had 29 tackles in one game as a senior — while catching the eye of pro scouts because of his speed and toughness. In three seasons at John Carroll, Fletcher recorded 386 tackles, 14 sacks and three interceptions.

Still, his size prevented him being drafted, and Fletcher signed with the Rams as undrafted free agent in 1998. He took it from there, recording 2,031 career tackles, 39 sacks 23 interceptions. He made the Pro Bowl four times, won a Super Bowl and is just one of four players to start more than 250 consecutive games.

"When I came out, there wasn't a ton of Division III players that made it in the National Football League," he said. "But when I had the kind of success I had, you saw more and more Division III guys not only playing but getting drafted. I'm proud of that."

Now retired, he'll enter one Hall of Fame this year and Fletcher has been nominated for induction into the Pro Football Hall of Fame — the one reserved for giants.

And a little linebacker from a little school.

"I'm soaking it all in," Fletcher said.