Holmes return for Baylor has some Bears 'at loss for words' 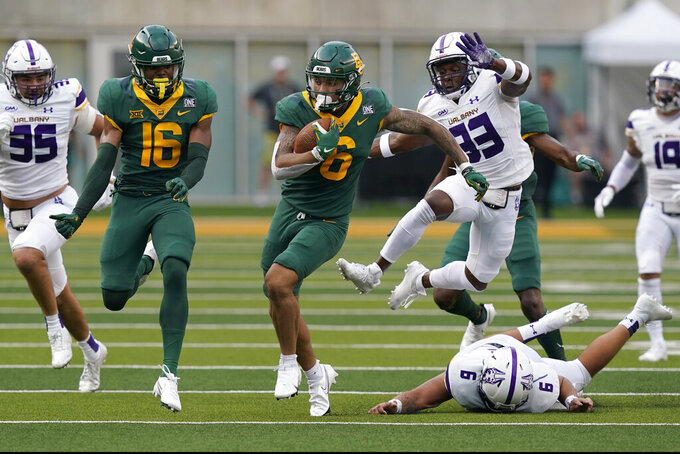 When Gavin Holmes weaved through the defense past would-be tacklers and broke free for the end zone on a punt return in the season opener, his Baylor teammates couldn't contain their excitement.

More than the 72-yard touchdown return, this celebration was about the sixth-year player who scored it. Holmes missed all of the Bears' Big 12 championship season last year because of a broken right foot, and that was after being limited to one game and missing their other conference title game during a two-season span when he twice tore the ACL in his left knee.

Not after five surgeries on his left knee, and all of the rehab that came with those. Not after the broken foot with ligament issues in the spring following the pandemic-shortened 2020 season, when he had 33 catches while playing in all nine games.

“I’ve always said I wanted to play until I physically can’t anymore, because I love this game. It’s all I’ve been doing my whole life,” Holmes said. “I’ve learned so much about myself in this process. And I know that I can still follow my dreams, chase my dreams and do what I want to do. So that really pushed me to keep going.”

In the first quarter of ninth-ranked Baylor's season-opening 69-10 win over FCS team Albany last Saturday, Holmes fielded a punt, escaped the grasp of an initial defender and then eluded several others. The final sprint was along the same sideline as the Baylor bench.

"I would hope that my son and my daughters kind of have the heart that he has, and just the awareness and the compassion that he has," Aranda said. “So you root hard for guys like that. And for him to have an opportunity, man, that’s so cool. It could not happen to a better dude."

Holmes, whose whole family was at the game, said the love and embrace he got from his teammates and coaches after the score was a feeling that he will never forget.

As for what Aranda said about him, Holmes said it was cool to hear.

“Just my journey, my testimony and all that ... I want to be an influence to people, who especially are going through things like that I have been through," Holmes said. “To hear coach Aranda say that about me, especially in reference to his own children, that’s amazing. I’m really appreciative and thankful that God has put me in this position to influence people like that.”

After being part of former coach Matt Rhule’s first signing class in February 2017, Holmes started four of the nine games he played in later that fall as a true freshman before his first torn ACL late that season. He has played in only 11 games since, including those nine in 2020.

Holmes already has his undergraduate degree in health, kinesiology and leisure studies. But he wasn't ready to be done playing for the Bears, who are at No. 21 BYU on Saturday night.

“I just want to contribute to the team in the best way that I can,” he said. “I’m surrounded by great guys and selfishly, it was fun being a part of that Big 12 championship last year, but I want to win one where I’m on the field.”