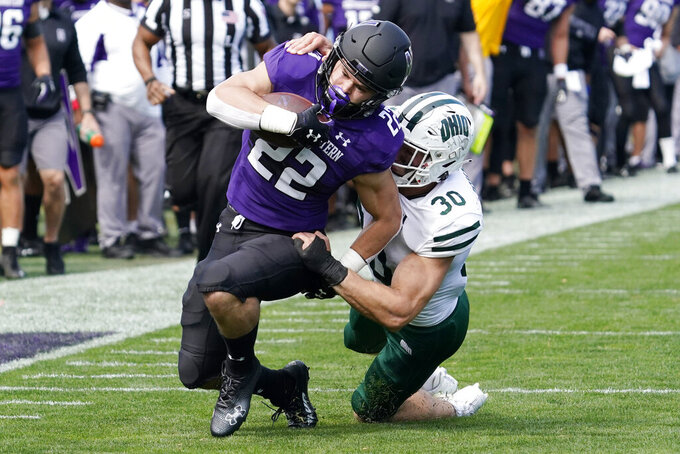 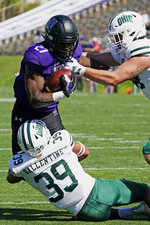 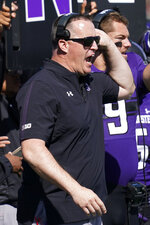 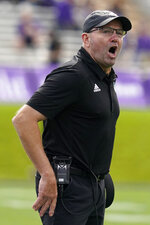 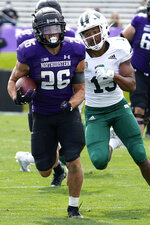 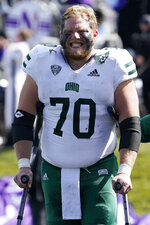 EVANSTON, Ill. (AP) — Evan Hull rushed for 216 yards and a pair of touchdowns Saturday afternoon to lead Northwestern to a 35-6 win over Ohio.

Hull bounced off a defender at the line of scrimmage late in the first quarter before sprinting away for a 90-yard score that helped set the Wildcats (2-2) up for their first win over an FBS team this season.

“I don’t think ever in my career have I had a 90-yard touchdown,” said Hull, who tumbled in after a swipe from a Bobcats defender. “Toward the end I just made up my mind no matter what happens, I’ve got to get into the end zone.”

“We started the way we wanted to,” said Northwestern Pat Fitzgerald, who indicated he won’t name next weekend’s starting quarterback immediately. “Evan was outstanding playing behind our offensive line. We were very physical.”

While its defense struggled to stop the hosts, Ohio (0-4) remained winless after often killing its own drives with a combination of turnovers, costly penalties and sacks. Kurtis Rourke was 20-for-29 for 166 yards with a fumble and an interception.

“We had three turnovers and all three were inside the 50,” Bobcats coach Tim Albin said. “We can’t put our defense in that position.

“You can’t come into Big Ten country and have three turnovers to their one and expect to win.”

Anthony Tyus III and Jake Arthurs added late touchdown runs and Charlie Kuhbander made a pair of short field goals for Northwestern, which led 17-0 at intermission.

Ohio staved off a shutout when backup quarterback Armani Rogers scored on a 55-yard keeper on the game’s final play.

Ohio: Ten penalties, the three turnovers and myriad offensive-line breakdowns helped doom the Bobcats, who fell 49-14 at Louisiana-Lafayette last weekend, to their second lopsided road loss in as many weeks. That’s no way to prepare for the start of Mid-American Conference play.

Northwestern: Hilinski, a South Carolina transfer, wasn’t spectacular in his debut start and it’s not clear if the coaching staff will return senior Hunter Johnson to the starting role. Whoever starts under center in coming weeks needs to be as confident as possible for an early conference stretch that includes trips to Nebraska and Michigan and visits from Minnesota and Iowa.

The Bobcats opened the game with a long drive into Northwestern territory but came up empty when a 32-yard field-goal try went wide right. Rourke later fumbled to set up Northwestern’s first touchdown and Ohio missed a huge chance to shift the momentum late in the first half when Jett Elad dropped what would’ve been an easy pick-six to cut the lead to 14-7.

WILDCATS … IN THE WILDCAT

Northwestern called several direct snaps to running back Tyus, who ended the day with 51 yards on 11 tries. His 7-yard scoring run out of the wildcat midway through the fourth quarter gave the small home crowd ample incentive to head for the exits … perhaps to catch the final minutes of the Wisconsin-Notre Dame game being played a few miles down the Lake Michigan shore at Soldier Field.

Northwestern: At Nebraska on Oct. 2