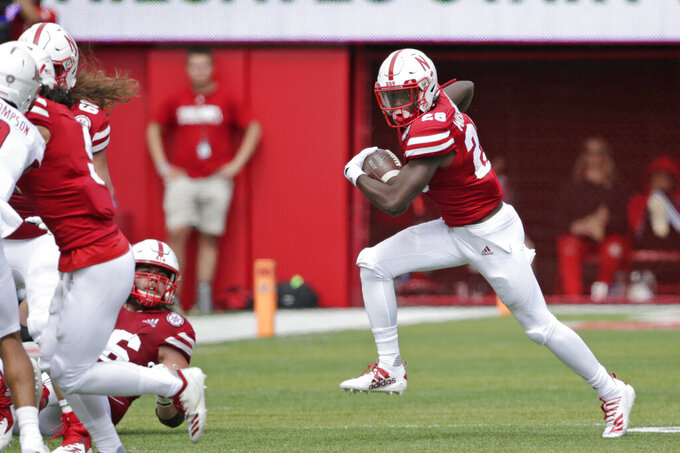 Nebraska running back Maurice Washington (28) carries the ball during the second half of an NCAA college football game against South Alabama in Lincoln, Neb., Saturday, Aug. 31, 2019. Washington, who faces pornography charges in California stemming from an incident in high school, entered the No. 24 Cornhuskers' game against South Alabama in the third quarter. Nebraska won 35-21. (AP Photo/Nati Harnik)

LINCOLN, Neb. (AP) — Nebraska running back Maurice Washington, who faces pornography charges in California stemming from an incident when he was in high school, was suspended for the first half against South Alabama on Saturday and any further disciplinary action will be determined by how his court case plays out.

Washington, the Cornhuskers' second-leading returning rusher, carried six times for 39 yards and caught one pass for 13 in the second half of the 35-21 victory.

His status was unknown to the public heading into the game. Coach Scott Frost said afterward that university administration and the coaching staff made a joint decision late Thursday or early Friday to suspend Washington for the first half. Washington also was disciplined internally and missed the spring game in April.

"We won't consider additional discipline for him until the matter is adjudicated," Frost said.

Dedrick Mills started at running back and rushed 15 times for 44 yards and two touchdowns.

Washington, a sophomore, faces a felony count of possessing a video or photograph of a person under 18 who is engaging in or simulating sexual conduct and a misdemeanor count of distributing that video without consent, leading to the person suffering emotional distress. He has pleaded not guilty. Washington has a court hearing scheduled Tuesday in San Jose.

He is accused of obtaining a video of his former girlfriend performing a sex act, storing it on his cellphone and sending it to the girl in March 2018. Washington is not depicted in the video.