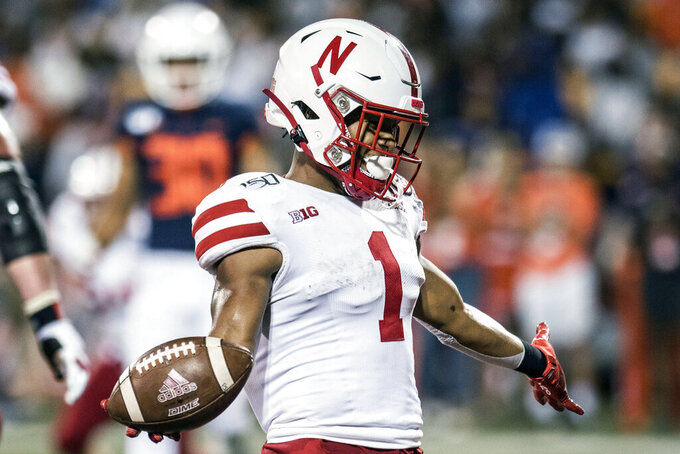 FILE - In this Sept. 21, 2019, file photo, Nebraska's Wan'Dale Robinson (1) scores in the second half of an NCAA college football game against Illinois in Champaign, Ill. Robinson has announced his plan to transfer. Robinson posted his decision on Twitter on Monday, Jan. 11, 2021, saying he wants to move closer to his family in Kentucky. (AP Photo/Holly Hart, File)

LINCOLN, Neb. (AP) — Nebraska wide receiver Wan'Dale Robinson has announced his plan to transfer, leaving the Cornhuskers without one of their top playmakers in 2021.

Robinson revealed his decision on Twitter on Monday, saying he wants to move closer to his family in Kentucky.

Robinson split time between running back and receiver as a sophomore. He became the primary running back after Dedrick Mills went out because of an injury. Robinson averaged 5.2 yards per carry while rushing for 240 yards and a touchdown.

He led the team with 51 catches for 461 yards and a touchdown.

Robinson was one of the prize recruits for coach Scott Frost in 2019, signing after he de-committed from Kentucky. He was rated a four-star prospect, and he also visited Alabama, Ohio State and Michigan.