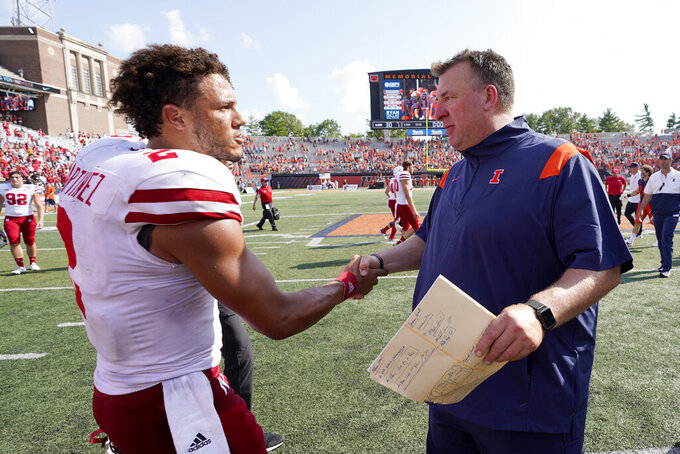 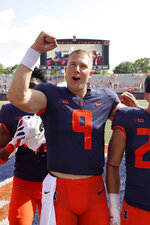 CHAMPAIGN, Ill. (AP) — Under a new coach, with fans packed into the stands for the first time since 2019 and its backup quarterback at the helm, Illinois beat Nebraska 30-22 on Saturday to kick off the 2021 college football season.

The Big Ten conference win didn’t come without a price for the Illini.

Illinois starting quarterback Brandon Peters left the game holding his left (non-throwing) shoulder after being sacked hard near the end of the first quarter. He was 3-of-4 passing for 35 yards. He did not return and was replaced by Artur Sitkowski, a sophomore transfer from Rutgers.

“No injury updates yet,” first-year Illinois coach Bret Bielema said. “But as you could see, it was Brandon’s non-throwing arm, so there’s that.”

Sitkowski engineered several long scoring drives using a balanced attack under Bielema’s new system, which he worked to perfection during a successful tenure at Wisconsin.

Sitkowski was 12 of 15 passing for 124 yards, two touchdowns and no interceptions.

The Illini rushing attack was led by Mike Epstein, who rushed for 75 yards on 16 carries, including a 45-yard run in the first quarter.

Gabe Ervin Jr. carried the ball 12 times for 19 yards and Markese Stepp had three carries for 10 yards and a touchdown for the Huskers.

Illinois scored on a defensive gem late in the first half when Keith Randolph Jr. sacked Martinez and knocked the ball loose near midfield. Calvin Hart Jr. scooped it up and scampered 41 yards for an Illini touchdown with less than a minute in the half.

Hart Jr. was injured late in the game and was helped off the field with what appeared to be a left leg injury.

Illinois led 16-9 at the break and took a 23-9 lead midway through the third quarter on a 2-yard touchdown pass from Sitkowski to tight end Luke Ford.

Nebraska coach Scott Frost was being crucified on social media by furious Huskers fans before the end of the first quarter. Frost is starting his fourth year with the program currently under NCAA investigation. The university announced Aug. 18 the NCAA is looking into the football program amid allegations Cornhuskers staff improperly used analysts and consultants with Frost's knowledge and even moved workouts off campus last year when such activities were banned during the pandemic.

Frost is now a dismal 12-21 during his tenure at Nebraska.

“It’s like the same old movie’” Frost said after the game. “But we’ll get much better. In my heart, I believe we can have a special season.”

It’s likely his job will depend on it.

Illinois punter Blake Hayes clearly would have been the player of the game had anyone in the stands had a vote. He may have garnered votes from both coaching staffs, as well.

The Australian punter averaged 45.3 yards per punt, pinning Nebraska deep several times including one that led to an Illini safety to begin the game.

The early changes Bielema has brought to the Illinois program paid off handsomely in a key early conference win. Despite losing its starting quarterback, the offense looked smooth all afternoon and the defense held when it needed to. This was a win in more ways than just on the scoreboard for Bielema and his coaching staff.

Martinez played exceptionally well, and provided nearly all of the Huskers’ bright spots on offense. With Frost on the hot seat already, Saturday could prove a costly loss.