JT Daniels, receivers try to refine timing for No. 17 USC 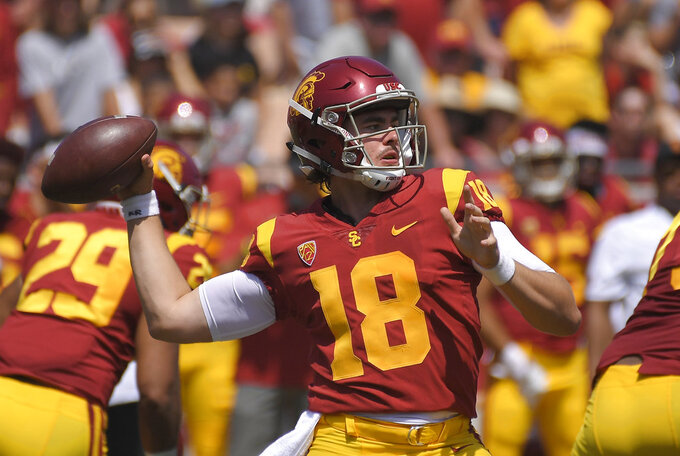 LOS ANGELES (AP) — Quarterback JT Daniels made a strong debut for No. 17 Southern California, but it would have been spectacular if not for some uncharacteristic drops by Tyler Vaughns and Michael Pittman Jr.
Refining the chemistry between the freshman and his two most experienced targets in the passing game is a priority for the Trojans going into their Pac-12 opener at No. 10 Stanford on Saturday.
"When you get in real live games and finally see what (Daniels) can do with the ball, yeah, it takes a little bit of time. But these guys are pros. I know Tyler Vaughns and Michael Pittman are going to go out there and shine," USC coach Clay Helton said.
Daniels was 22 of 35 passing for 282 yards and one touchdown against UNLV, becoming the second USC freshman to start in a season opener. However, Vaughns dropped two potential touchdown receptions in the red zone and Pittman also dropped a potential touchdown reception inside the 20.
Those mistakes were part of the reason USC settled for five field goals in the 43-21 win over the Rebels, failing to create separation until Daniels found freshman Amon-Ra St. Brown for a 43-yard touchdown pass on the first play of the fourth quarter.
Pittman said the team handled it in stride, with Daniels showing off his "goofball" personality by joking about the drops with the junior wide receiver in the locker room after the game.
"It's actually the weirdest thing," Pittman said. "You would think the USC starting quarterback would be serious, like Sam Darnold serious. No, that's not him."
That's not to say that Daniels lacks a studious side. He was a regular presence around USC during spring practice, even as he was taking an accelerated course load to graduate one year early from Mater Dei High School in Orange County. Daniels would frequently pester Pittman, who was sidelined because of a shoulder injury, for more information about the offense.
"Before he had even gotten a playbook this kid was telling me the plays and was asking me about coverages," Pittman said. "I was just like, 'I don't even know. You got to ask (quarterback) Matt Fink or somebody. Not me.'"
That persistence paid off, as USC was practically flawless operationally, even with first-time starters at quarterback and center in redshirt freshman Brett Neilon. There were no penalties for false start or illegal procedure. Daniels and the Trojans did not turn the ball over, though he did fail to spot a linebacker dropping in coverage on one play.
"Got glued in on one dig route where he eyed it pretty heavily, and we got fortunate it wasn't a turnover, but 34 out of 35 opportunities he went to the right place," Helton said.
The most obvious sign of Daniels' inexperience came when he got turned around trying to hand the ball off, forcing him to run for a gain of five yards. Other than that, it was a good start to build off going into his first road game.
"Once he got the butterflies out and the jitters, he was operating like a pro," senior running back Aca'Cedric Ware said.
Daniels and his receivers are already working to improve their timing, which was hindered by the three-man competition in training camp. Working extensively on throwing the deep ball in practice Tuesday, Pittman made a difficult overhand catch during one-on-one drills and showed the kind of progress that will come as he and Vaughns work more extensively with Daniels.
"We were like this close from three touchdowns to each other," Daniels said. "We just know it's going to take some time and some extra reps."
___
More AP college football: https://apnews.com/tag/Collegefootball and https://twitter.com/AP_Top25