K-State at crossroads after troubling loss to Oklahoma State 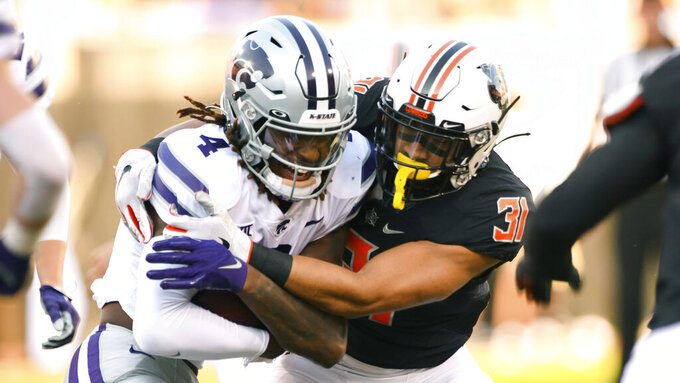 He had sixth-year senior Skylar Thompson returning from a season-ending shoulder injury, ready to regain the reins of an offense that was humming before he was hurt. And backing him up was Will Howard, a sophomore who gained a ton of experience after Thompson was hurt last season.

Well, four games into the season and the Wildcats (3-1, 0-1 Big 12) are at a quarterback crossroads.

Thompson was hurt on an innocuous play against Southern Illinois a couple of weeks ago and his return is still to be determined, though there is a chance he could play at home Saturday against No. 6 Oklahoma (4-0, 1-0).

“He can throw it, but we’ve got to make sure he can run it before he can play and I don’t know if that’s two weeks, the open week, three weeks,” Klieman said over the weekend. "We’ll keep progressing him.”

Meanwhile, Howard had struggled so mightily in his place that his starting job was on shaky footing, then he got banged up in the first half at Oklahoma State and took a seat. His final line: 4 of 12 for 50 yards with three carries for 28 yards in the 31-20 loss.

That meant the most work yet for third-stringer Jaren Lewis, who showed some positive flashes in going 10 of 19 for 148 yards with a touchdown and an interception. He seemed to have more poise and confidence than Howard, and his ability to throw the ball downfield was a refreshing change from what Kansas State had shown the past couple weeks.

“Did some good things,” Klieman acknowledged. “Had the pick that he probably should've thrown away because we had a chance to get a field goal or at least points there. We weren't getting a bunch of guys wide open, so there were some tight windows and they were rushing the passer well. He did some good things. A great learning experience.”

So now the Wildcats could have three experienced quarterbacks available when the Sooners visit. Or they could have two or one.

The most important position on the field isn't the only crossroads the Wildcats are facing this week. They're also in a strangely similar situation to last season, when they were riding high following a 4-1 start — with an upset of Oklahoma — only to lose their final five games with several in laughably lopsided fashion.

Does the upstart team that entered the rankings at No. 25 last week turn things back in a positive direction? Or does one loss become two against the Sooners, sending another promising season headed down the same path as last year?

“We've got to come up with better schemes and plans on both sides of the ball. We've got to execute as well,” Klieman said. “We've got to get back to work. It's a long season with an awful lot of opportunities in front of us. If we learn from this and we continue to improve, we've got a chance to be OK."

There was little encouraging in the first half Saturday, when the Cowboys surrendered an opening field goal before roaring to a 31-10 lead late in the second quarter. Kansas State running back Deuce Vaughn had no room to run, finishing with 22 yards on 13 carries, and offensive coordinator Courtney Messingham's offense never got into a rhythm.

Yet the Wildcats at least gave themselves a chance in the second half. They got a field goal just before the break, then Lewis hit Vaughn for a 55-yard touchdown pass that got the Wildcats within 31-20 late in the third quarter. But that was it.

“Adversity has struck us for the first time this year. That’s reality. How do you respond when adversity strikes?” Klieman said. “I’m confident that the leadership with our guys will respond to the adversity. We can’t sulk on it. We've got to get ready to play Oklahoma next weekend.”