K-State to lean on transfer backfield under new head coach 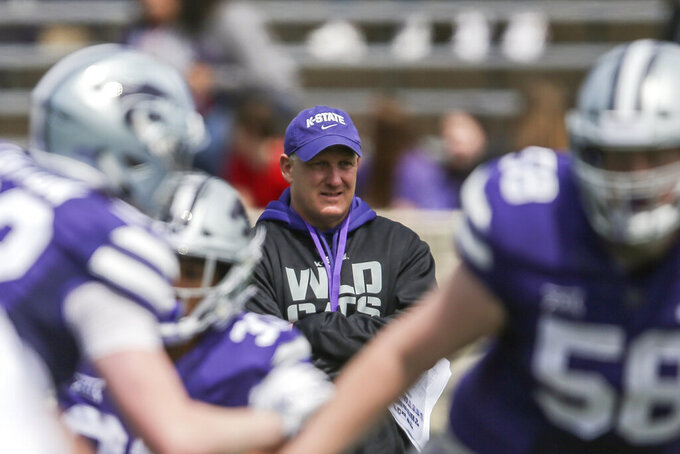 FILE - In this April 13, 2019, file photo, Kansas State head coach Chris Klieman watches his team during an NCAA college football practice in Manhattan, Kan. Klieman knew he had a problem when he looked at the roster he was inheriting at Kansas State. He had a veteran QB. Veteran offensive line. Lots of veterans on defense. And not a single running back. None. At all.(Travis Heying/The Wichita Eagle via AP, File)

MANHATTAN, Kan. (AP) — Chris Klieman probably felt good about the team he was inheriting at Kansas State when the new coach looked down the depth chart and saw a veteran quarterback in Skylar Thompson, experience on the offensive line and plenty of playmakers on defense.

Then he looked at running back. Or rather, he looked at the giant hole at the position, which was a favorite position for Klieman at FCS powerhouse North Dakota State.

The Wildcats returned not a single scholarship back from last year's team, losing top rusher Alex Barnes to the NFL and everybody else to graduation or retirement. In fact, Thompson is the only player left on the roster who had yardage on the ground last season after wide receiver Isaiah Zuber also transferred.

"I thought, 'We've got to fix this in a hurry,'" Klieman recalled, "and you're not going to fix it with young kids. You have to fix it with junior college kids or grad transfers."

In other words, Klieman wanted to find some experience to supplement his incoming freshmen.

He found plenty of it.

James Gilbert arrived from Ball State, where he ran for more than 2,000 yards and 23 touchdowns over parts of three seasons. Jordan Brown transferred in from North Carolina, where he started nine games just a couple years ago. Harry Trotter returned to Kansas, where he grew up and played junior college football, after a stint at Louisville followed by a redshirt season last year.

Talk about restocking a roster.

"We felt comfortable going with the grad transfer route because we found a couple of guys that we felt could fit what we're doing," Klieman said. "Jordan played the game at a high level, so his learning curve wasn't as big as a freshman. The same with Jordan and Harry. Just learning formations and protections and understand long play calls in the huddle, they've been there before. They jumped right in."

Gilbert was listed as the starter on the initial depth chart released ahead of Saturday's opener against Nicholls State, while Brown and Trotter were listed as the backups with the "OR" designation.

All three of them are expected to play quite a bit.

"The experience I've had has helped me, at UNC, coming here and knowing the offense. It's helped me a lot," Brown said. "Knowing different schemes and things, it helped me pick up the playbook fast."

Each of the running backs has a slightly different skillset, but all of them fit nicely into the system run by new offensive coordinator Courtney Messingham. It is predicated not just on running between the tackles or taking pitches toward the sideline, but also catching the ball downfield.

One thing is clear: The sudden abundance of running backs is a good thing.

Klieman tended to cycle through several of them when he was at North Dakota State, allowing him it have fresh legs on the field throughout the game. And the fact that all three of them are running out of time in their college careers has created a sense of desperation in practice.

"Everybody wants to play, wants to get touches," Brown said. "We compete every day as a running back group. We're also at the same time trying to help each other get better. We know when each of us is helping each other, it's going to help the team."

Spoken like someone who has been through the college grind.

The Wildcats have plenty of developmental running backs, too. Their freshman class included touted prospects Joe Ervin from South Carolina and Thomas Grayson from Oklahoma. Clyde Price is a bruising back from the Kansas City area and William Garrison III arrived from a high school in Wisconsin.

They are also benefiting from the trio of veterans ahead of them on the roster.

"We are going to play a number of guys there and give a number of guys the opportunity to carry the football," Klieman said. "I'm not sure how it will all play out, but we're confident in several guys at the running back spot. We will play like that probably throughout the season."