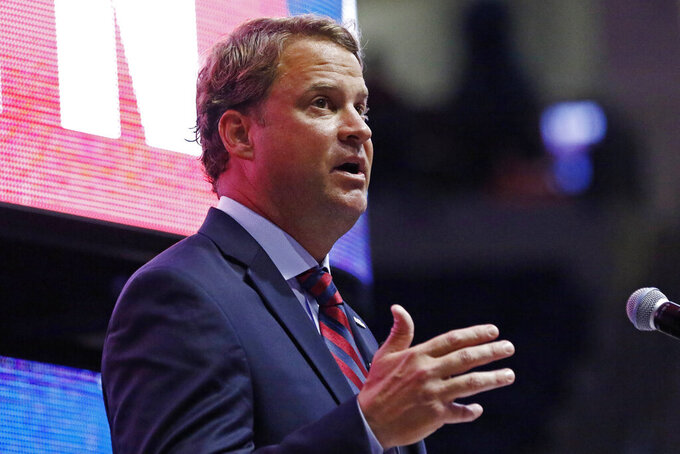 Lane Kiffin speaks to Mississippi fans after being introduced as the new NCAA college football coach during a public introduction at The Pavilion, a multipurpose arena on the campus in Oxford, Miss., Monday, Dec. 9, 2019. Kiffin was previously, the football coach for three years at Florida Atlantic. (AP Photo/Rogelio V. Solis) 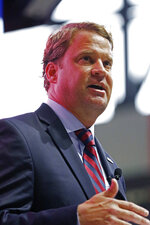 Lane Kiffin is back in the Southeastern Conference vowing to lead Mississippi the kind of consistent success it has lacked for much of its history.

“We didn’t come here to be good,” the new Ole Miss coach said Monday. “That’s not why we’re here today. We came here to be great.”

New Ole Miss athletic director Keith Carter said at the start of this coaching search that he wanted to find someone who could command a room and galvanize a fan base that had grown tired of losing.

Carter believes he found that person in Kiffin, a former Tennessee and Southern California coach who just led Florida Atlantic to its second Conference USA title in the last three years. Kiffin went 26-13 at Florida Atlantic and owns an overall record of 61-34 in eight seasons.

The excitement of Ole Miss’ fan base about Kiffin was evident from the reception he received, with a crowd gathering to watch his plane land in Oxford well before his introductory news conference.

“A lot better than another tarmac experience that I had,” Kiffin quipped in reference to the time he got fired as Southern California’s coach near the team plane after a 2013 loss to Arizona State.

Kiffin takes over an Ole Miss program that hasn’t had a winning season since going 10-3 in 2015 and winning the Sugar Bowl. The Rebels went 4-8 this season.

But the Rebels have shown they can win, as Kiffin is quick to point out.

Kiffin noted that Alabama lost just two regular-season games when he was the Crimson Tide’s offensive coordinator from 2014-16. Both those losses came against Ole Miss.

“You can win there because I saw it,” Kiffin said. “No one else was beating us. I always kind of said that’s a premier job that at times has performed like that and at times hasn’t. That’s partly why we’re here today. It’s our job to bring it back to where it’s been before and sustain” that success.

Those Ole Miss teams that beat Alabama were coached by Hugh Freeze, who resigned in the summer of 2017 after university officials found a “pattern of personal misconduct” that started with the school’s investigation into a call to an escort service.

That’s not the only off-field issue to recently hamper Ole Miss' progress.

Ole Miss vacated 33 wins over a six-year period — including the 2014 victory over Alabama — after the NCAA found that Rebels committed recruiting violations. Some of the violations were committed by Kiffin’s brother, former Ole Miss defensive line coach Chris Kiffin.

Lane Kiffin noted that Ole Miss’ program often has gone through up-and-down periods, following a few winning seasons by taking a dip. Kiffin believes he can change that.

“When we nail this thing recruiting-wise from top to bottom in our classes and not just some stars at the top so our ranking’s big, and we develop the bottom of the roster, then we can avoid those types of swings,” Kiffin said.

Kiffin has earned a reputation as one of college football’s most outspoken personalities.

During his lone season at Tennessee, Kiffin was unafraid of tweaking the Vols’ SEC rivals. While working at Florida Atlantic, Kiffin never shied away from showing his sense of humor on Twitter.

“Coach Kiffin is a lightning rod,” Carter said. “As you’ve seen, his presence alone can generate confidence, energy and a swagger that inspires student-athletes to reach their full potential while galvanizing Rebel Nation. But I also (have) learned who coach Kiffin is as a person. He has spent his life under the microscope and he talked about how much he has grown in that journey.’’

Yet he also has been polarizing.

Kiffin coached Tennessee to a 7-6 record in 2009 but drew the ire of Volunteers fans when he left after only one year for his dream job with USC.

After getting fired at USC, Kiffin worked on Nick Saban’s staff at Alabama. But after Kiffin took the Florida Atlantic job, Saban replaced him as offensive coordinator before the College Football Playoff championship game rather than having him stay through the postseason.

Kiffin said all of his experiences have helped him grow as a coach. He noted that his years working with Saban helped teach him how to manage a program.

“I used to coach thinking that my job was to win games and get players to the NFL — and that was it,” Kiffin said. “Now I understand, OK, (it’s about) developing players off the field, developing relationships with them and chemistry with them so we’re helping ... beyond just football. We’re excited to get that started here.”