Latest ACC Showdown has No. 2 Notre Dame at Boston College 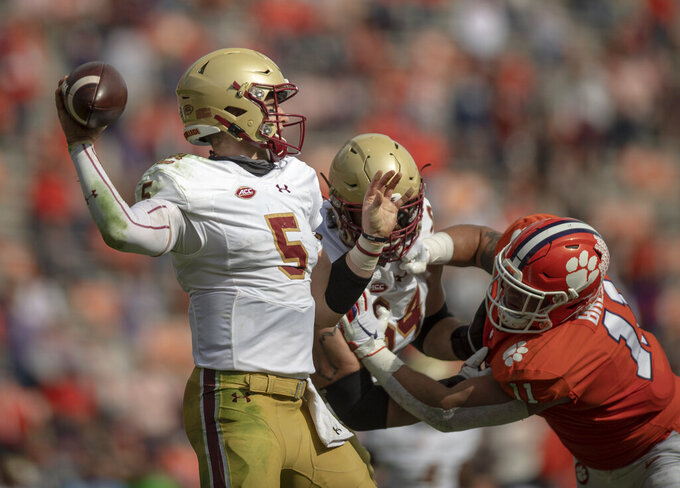 Here’s what to look for in the Atlantic Coast Conference in week 10:

No. 2 Notre Dame (7-0, 6-0 Atlantic Coast Conference) at Boston College (5-3, 4-3). The Fighting Irish are coming off a huge, double-overtime, 47-40 home victory over then-No. 1 Clemson that put them alone in first place in the ACC and kept alive their hopes of appearing in the College Football Playoff. The teams last played in the Boston metro area in 2015, when the No. 4 Fighting Irish held off BC for a 19-16 win at Fenway Park. Notre Dame leads series 16-9 after last year's 40-7 win. Brian Kelly is 6-0 against Boston College as Notre Dame’s coach and is seeking his 100th career victory at the school. He'll be facing one of his former quarterbacks, Phil Jurkovec. The sophomore transfer completed 12 of 24 passes for 204 yards and two touchdowns in a six-point loss at Clemson two weeks ago, leads the ACC with 2,083 passing yards, and is an adept scrambler who can throw effectively on the run. He was stuck behind Ian Book at Notre Dame and has thrived under first-year Boston College coach Jeff Hafley.

Boston College QB Phil Jurkovec against the Notre Dame defense. Jurkovec is 172-for-277 passing with 15 touchdowns and four interceptions and ranks sixth in the ACC in total offense at 272.4 yards per game. The Irish defense is allowing 296.6 yards per game, virtually tied with Pittsburgh for the top spot in the conference, and a league-best 14.6 points per game, and opponents are averaging just 15.9 first downs. The Irish also rank first on third down, holding opponents to a 24.7% conversion rate, and third in pass defense (211.4).

In-state rivals Wake Forest ( 4-2, 3-2) and North Carolina (5-2, 5-2) meet Saturday and the Demon Deacons are nearly 14-point underdogs despite a four-game winning streak. Last season they built an early 21-0 lead and then held off the Tar Heels for their fourth win in the last six meetings between the teams. This will be the first game in the series at Chapel Hill since 2015. North Carolina has lost to Florida State and Virginia, who have a combined record of 4-9.

Clemson's 28-game league winning streak fell one win shy of matching the record of 29 in a row set by Florida State in its first 29 games as an ACC member. The victory also was the 13th in a row for the Fighting Irish, the longest winning streak in the country. Notre Dame also has won 23 in a row at home.

Notre Dame linebacker Jeremiah Owusu-Koramoah seems to be everywhere on defense for the Irish. He has 35 tackles, including a team-high 8.5 tackles behind the line, and also has an interception and two forced fumbles. In last week's big win over Clemson he returned a fumble 23 yards for a touchdown and forced another fumble on the next possession to set up a field goal.

By Stephen Hawkins 2 minutes ago
By Emily Wagster Pettus an hour ago
By Aaron Beard 2 hrs ago
By Ralph D. Russo 3 hrs ago
3 hrs ago