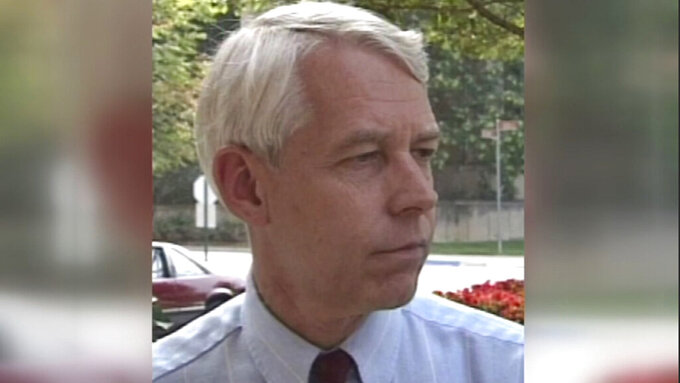 This 1992 image made from video provided by WBNS-TV, shows Dr. Richard Strauss. A report released on Friday, May 17, 2017, found that the now-dead Ohio State team doctor sexually abused at least 177 male students from the 1970s through the 1990s, and numerous university officials got wind of what was going on over the years but did little or nothing to stop him. (WBNS-TV via AP)

COLUMBUS, Ohio (AP) — The Latest on the report detailing abuse of male athletes and students by a now-dead doctor at Ohio State. (all times local):

An attorney who is preparing a lawsuit against Ohio State University on behalf of more than 50 former athletes who say they were abused by a team physician says most of those clients were football players from the school's storied program, including well recognized stars who went on to the NFL.

Dayton attorney Michael Wright told The Associated Press on Saturday that the abuse by Dr. Richard Strauss occurred during required physical examinations at the Woody Hayes Athletic Center, during treatment for injuries and ailments at Strauss' off-campus clinic and at his home. Strauss killed himself in 2005.

An investigative report released Friday finds that Strauss sexually abused at least 177 male students but it makes only one specific reference to football players.

The whistleblower credited with prompting an investigation of sexual abuse of students and athletes by a now-dead team doctor at Ohio State University says in a statement he feels "vindicated" but has mixed feelings about the law firm's findings released Friday.

Mike DiSabato, a former Ohio State wrestler, met with school officials in March 2018 to discuss the abuse that he and other athletes suffered at the hands of Dr. Richard Strauss, prompting the school to hire Seattle-based Perkins Coie to conduct an investigation.

Attorneys for DiSabato and more than 50 other former Ohio State athletes are preparing to sue the school for damages.

Victims of a now-dead Ohio State team doctor are reacting with shock, grief and anger at investigative findings documenting a heinous pattern of sexual abuse that many of them say they experienced as young men and then worked for decades to forget.

Their reactions follow the university's release of a report Friday that found Dr. Richard Strauss groped, ogled or otherwise sexually mistreated at least 177 male students from at least 16 sports, and at the student health center and an off-campus clinic.

One victim said the report left him angrier than before. He said he witnessed Strauss' abuse and then experienced it himself.

The report said that Ohio State personnel knew of complaints and concerns about Strauss' conduct but failed for years to investigate or take meaningful action.