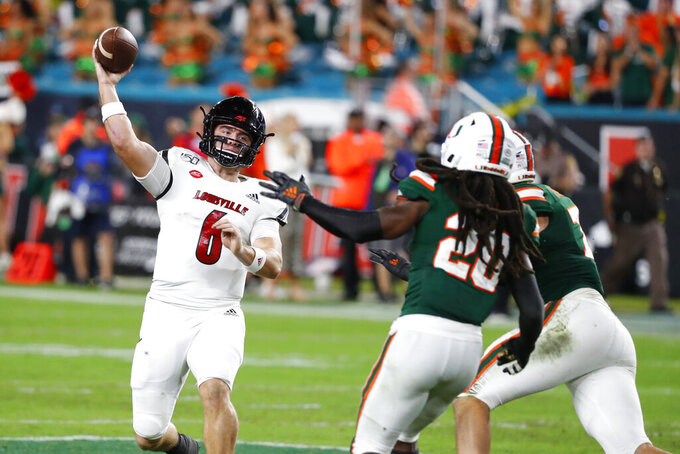 RALEIGH, N.C. (AP) — Louisville is looking to bounce back from a blowout loss. North Carolina State is all too familiar with that feeling.

Both teams lost conference games last week by a combined score of 107-37, with Miami beating the Cardinals 52-27 before No. 3 Clemson routed the Wolfpack 55-10 for their third straight loss, all by at least 21 points.

“I know right now, it’s tough. As a fan base we’re suffering through some difficult things, but I also know we’ve built a heck of a program here,” N.C. State coach Dave Doeren said. “Being young and facing the injuries has created a reality of adversity that we’re in, and I really believe adversity shows your true self.”

The Cardinals can qualify for a return to the postseason in a year in which they were overwhelmingly picked in the preseason to finish last in the ACC’s Atlantic Division. Satterfield says the goal this week is to flush the loss to the Hurricanes and get refocused.

“Whether you did play well or if you didn’t play well it doesn’t matter. You have to come back this week and give it everything you have in your preparation,” Satterfield said. “We have to take some positives out of it. But you have to continue to get better. We want to continue to improve. There are a lot of things we can get better at and if we don’t and you let that linger, that loss will end up with another one.”

Some things to know about the Louisville-N.C. State game:

Injuries have become the dominant storyline of N.C. State’s season. Seven players, including five starters, have been lost for the season. Three of the team’s four captains have combined to miss 16 games, and 45 players have started games for the Wolfpack — the most for a power-conference school. They haven’t started a single senior on offense for two games while six of their offensive starters in that game were freshmen or redshirt freshmen.

“I wish it was all one injury so I could tell you we’re not doing something right,” Doeren said. “But it’s not. It’s a foot here, a knee there, a concussion here. ... It’s one of those things we’re going through right now.”

THESE CARDINALS CAN RUN

Louisville enters with the ACC’s third-best rushing offense, averaging 212 yards, and put up 168 yards rushing against a Miami run defense that is giving up 111 yards per game. The Wolfpack are allowing an average of 266 yards rushing during their three-game losing streak after holding five of their first six opponents to fewer than 100 yards on the ground.

The Cardinals lead the league with 21 offensive plays that have covered at least 40 yards and a dozen 50-yarders. N.C. State is tied with Duke with the fewest 40-yard plays (five) and only has had two that went for 50 yards.

Doeren isn’t thrilled with having to play a Saturday night game before a road game at Georgia Tech the following Thursday night, saying teams should “never have to play a night game on the Saturday prior” and urging the ACC to consider it. He says that by the time his players wake up Sunday morning, “it’s already gameweek Wednesday” and will have only a couple of days to prepare before leaving for Atlanta on Wednesday. “It’s crazy, short turnaround,” he said.