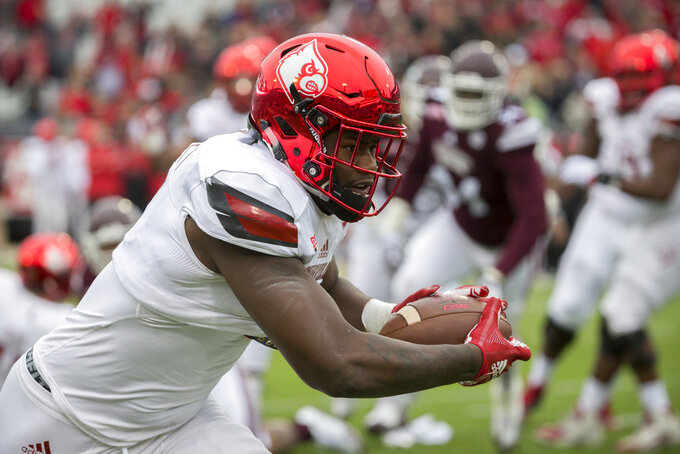 FILE - In this Dec. 30, 2017, file photo, Louisville tight end Kemari Averett (11) runs down the sideline with the ball during the first half of the TaxSlayer Bowl NCAA college football game against Mississippi State, in Jacksonville, Fla. Kemari Averett has been arrested and charged, Tuesday, Oct. 16, 2018, with putting a gun to his girlfriend's head and threatening to kill her. The tight end has been suspended from the team. University of louisville police charged him with first-degree wanton endangerment and fourth-degree assault. (AP Photo/Stephen B. Morton, File)

LOUISVILLE, Ky. (AP) — Louisville football player Kemari Averett was charged Tuesday with putting a gun to his girlfriend's head and threatening to kill her. The tight end was suspended from the team.

The 20-year-old sophomore remains in Louisville Metro jail on $10,000 bond after pleading not guilty and faces an Oct. 26 hearing. University police charged him with first-degree wanton endangerment and fourth-degree assault.

"Mr. Averett disagrees with the allegations as stated," the player's lawyer, J.P. Ward, said Tuesday night. "We'll look at those allegations going forward and look forward to our day in court."

According to the arrest citation, Averett realized his laptop was missing from a backpack returned by his girlfriend after the two had been studying Sunday night. The woman was unaware the laptop was missing, the report added.

Averett approached her car and put a gun to her temple, threatening to kill her, the citation said. The report added that Averett threatened to shoot the car and told her he would "have my people looking for you." Witnesses said Averett pulled her hair while pointing the gun, the report added.

The report referred to Averett as the father of the woman's baby, but he has denied it. He gave the woman a baby outfit and ultrasound pictures she had given him earlier, according to the report.

The suspension is indefinite, and coach Bobby Petrino said Averett is barred from the team facility and activities. Petrino added in a statement that the team strives to "develop a culture of accountability that everyone in our program must live up to."

Athletic director Vince Tyra backed Petrino, saying in a statement the school has "high expectations" for all its athletes and "inappropriate conduct will absolutely not be tolerated."

The 6-foot-7, 267-pound Averett has caught eight passes for 65 yards and two touchdowns in six games. Louisville is 2-5 and has a bye this week.