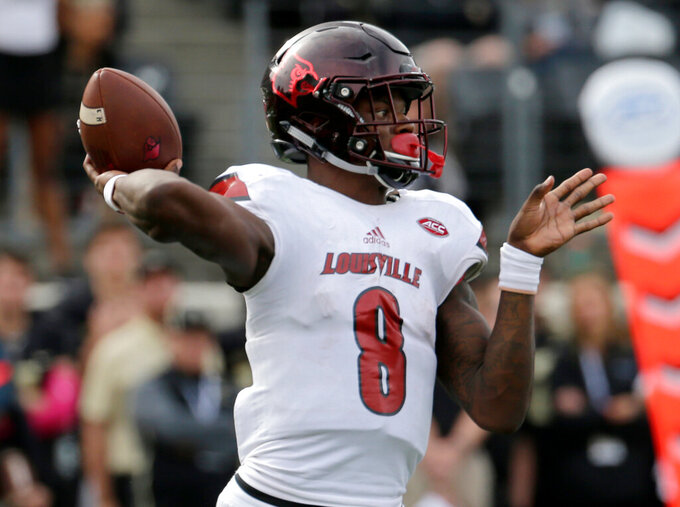 FILE - In this Oct. 28, 2017, file photo, Louisville's Lamar Jackson (8) looks to pass against Wake Forest during the second half of an NCAA college football game in Winston-Salem, N.C. Louisville will retire the No. 8 jersey number of former Cardinals quarterback Lamar Jackson, who in 2016 became the school’s first Heisman Trophy winner and finished his college football career as one of its most decorated players. Jackson’s jersey number will be retired during a ceremony at Louisville’s Nov. 13, 2021 home game against Syracuse.(AP Photo/Chuck Burton, File)

Jackson’s number will be retired during a ceremony at Louisville’s Nov. 13 home game against Syracuse. Jackson joins Johnny Unitas as the school’s only football players to have their numbers retired. Unitas’ No. 16 was retired in 2003.

Athletic director Vince Tyra cited Jackson’s Heisman and his 2019 NFL MVP award with the Baltimore Ravens as examples of the dynamic QB’s talent and success. He also praised the player’s humility that endeared him to Louisville teammates, coaches and staff.

“We’re so proud to retire his No. 8 for what he has accomplished so far,” Tyra said Saturday in a release, “but are equally excited about what’s to come. This city has big L’s up for our guy.”

Current Louisville receiver Tyler Harrell and defensive lineman Henry Bryant are wearing No. 8 and will finish this season in that jersey before its official retirement at the end of the year.