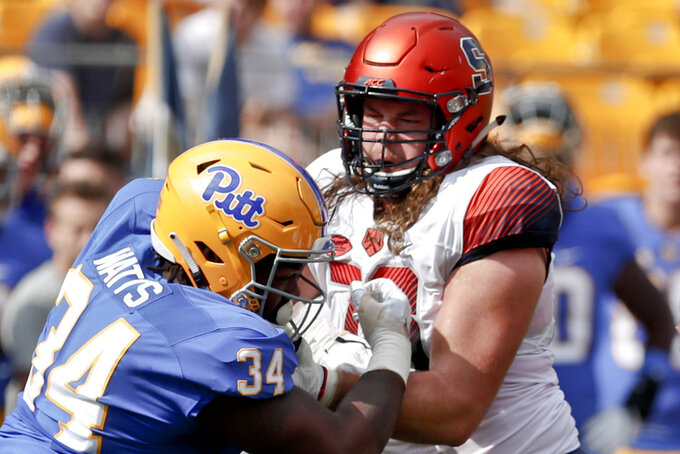 FILE--In this Oct. 6, 2018, file photo, Syracuse offensive lineman Koda Martin, right, blocks Pittsburgh defensive lineman Amir Watts (34) during an NCAA football game in Pittsburgh. Martin and Pittsburgh safety Dennis Briggs didn't want to wait until after college to get married. So they didn't. One of the factors that helped them take the plunge: the financial buffer provided by the NCAA's "cost of attendance" provision. (AP Photo/Keith Srakocic, File)

PITTSBURGH (AP) — The question arises regularly, usually after a Pittsburgh home game. And even though Dennis Briggs' teammates know the answer that's coming from the senior defensive back they jokingly and reverentially call "old man," they ask anyway because respect must be paid.

So when Briggs turns down their invitation to go out and either celebrate or commiserate, they don't complain.

"I have responsibilities," Briggs said. "They understand that. They don't give me a hard time about it."

It's not that Briggs doesn't enjoy hanging out. He does. It's just that time is precious for players like Briggs, who is among a small fraternity in the Atlantic Coast Conference attempting to navigate the push-pull of academics, big-time college football and wedded bliss.

If anything, those few hours after home games might be only time all week during the fall Briggs and wife Loren have a chance to decompress together without school, work or football getting in the way. So while many of the Panthers go out and do what college kids do on the weekend, Briggs typically heads home to the small one-bedroom off-campus apartment he and his wife share and exhales.

One that the NCAA played a small role in. The organization's decision in 2015 to allow schools to provide "cost of attendance" payouts to players gave Briggs and Syracuse offensive tackle Koda Martin — who is married to Orange head coach Dino Babers' daughter Jazzmin — peace of mind before popping the question.

"My wife graduated before me and was getting a job as a teacher, but I didn't want her to be dealing with the pressure of pulling the weight for me and her," said Martin, who transferred to Syracuse after graduating from Texas A&M, where he met Jazzmin, a volleyball player. "Thankfully, with my scholarship check and the cost of attendance check that had been added around the time we got married, it was a big difference-maker. It definitely comforted me and made me feel like I was really going to be financially stable and that it was feasible to be able to get married and have the stability that we needed, not have to stress too much about money."

The ties that bind Martin and the Orange are complex.

The 23-year-old's father Kirk — a longtime high school coach in Texas — is now the quarterbacks coach at Syracuse. Oh, and then there's the whole "father-in-law" as head coach thing. It can be a tricky line to walk at times.

"He holds me to a high standard definitely," Martin said of Babers. "There's no favoritism. If anything, I've got a little extra coaching and a little extra accountability at home, stuff like that."

Babers insisted there was no nepotism involved when he announced Martin — who married Jazzmin in the summer of 2017 and currently lives in the basement of Babers' house — as a starter. Martin's play has backed it up for the surprising Orange (5-2), winning over the respect of his new teammates in the process.

"I'm not even close to thinking about marriage, but I hope he feels like he's comfortable with playing under his father-in-law," Orange defensive end Kendall Coleman said. "Coming into a team that he really didn't know too much about, to come in here and immediately be an impact player for us is impressive."

The opportunity to be part of the renaissance Babers is trying to orchestrate at Syracuse is one of the reasons Martin wanted to join the Orange. Yet being married has helped provided him with perspective. The game can be all-consuming at times. Going home to his wife — even with his head coach living upstairs — gives him a reality check of sorts.

"I love football," Martin said. "It's a huge part of my life. I was raised in it. It's kind of hard to imagine my life without football, but at the same time it's not the end-all, be-all. My priorities are family, education and football. My faith gives me a lot of peace and comfort when things aren't going my way."

For a young couple on a budget, the "game checks" as the 22-year-old Briggs calls them, can go a long way.

"I wanted to know I could put food on the table and pay for some insurance for a vehicle that I'd saved up to pay for," said Briggs, who is pursing a master's degree in finance while Loren works at a church and takes online classes toward a college degree of her own. "I had all the basic necessities for living."

A life that's pretty hectic at the moment. Briggs is juggling 15 credit hours, a starting job in the Pitt secondary and married life. Yet it hardly appears to be overwhelming. If anything, Briggs is thriving. He's currently fifth on the team with 29 tackles for the Panthers (3-4) while providing a steadying presence in the secondary.

"He's playing at a high level right now, I think," Pitt head coach Pat Narduzzi said. "Better than he ever has."

Briggs isn't sure if there's a correlation between his rise and being married, though he believes tying the knot "made me a better leader." It's one of the reasons his teammates voted him a defensive captain over the summer after he admittedly struggled on the field in 2017.

Even if the lifestyle Martin, Briggs, Stone and other married players lead is different than the rest of the guys in the locker room.

"It can be a little isolating at times if you're the only married couple on the team because some events are players only," Virginia head coach Bronco Mendenhall said. "(When I coached at) Brigham Young, there were so many (couples) that there were couples only events. Well, when you're Lindell Stone and his wife and if you're one of the only married couples, then yeah, it can be a little bit of an identity crisis as to where they fit, but if they fit together, it all works well."

There are no such issues for Stone, who Mendenhall called "an unselfish and team-oriented player who kind of goes above and beyond to make sure" he fits in.

For Martin and Jazzmin, there are plenty of quiet nights at home but every once in a while they head out into the western New York night with the rest of the Orange. While Martin allows "it's a different dynamic," Jazzmin provides a secret weapon of sorts. Call it the byproduct of being the daughter of a coach and the wife of a player.

What the NCAA helped bring together — in a small way — let no man put asunder.