LSU looks to put 'Bama loss behind it against Arkansas 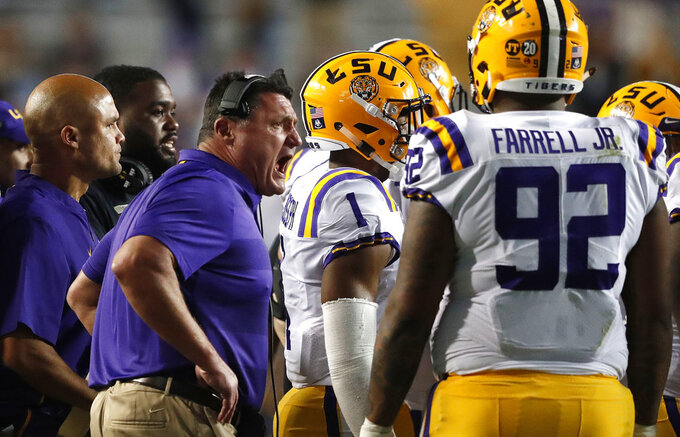 LSU head coach Ed Orgeron talks to his team during a timeout in the second half of an NCAA college football game against Alabama in Baton Rouge, La., Saturday, Nov. 3, 2018. Alabama won 29-0. (AP Photo/Gerald Herbert)

FAYETTEVILLE, Ark. (AP) — Santos Ramirez is under no illusion about how disappointing this season will be remembered for Arkansas.

The senior safety is just hoping at this point for one final memorable moment to cap his career in Fayetteville, a chance he will have when Arkansas (2-7, 0-5 Southeastern Conference) hosts No. 9 LSU on Saturday night.

"No matter what nobody says, we're still men and we're going to show that," Ramirez said. "You can't come in here and think we're just going to lay down for you just because we're 2-7. You've got to come up in here and fight."

Ramirez has plenty of reasons to put forth his best effort against the Tigers (7-2, 4-2), even though Arkansas is already well on its way to missing a bowl game for a second straight season. He is from Shreveport, Louisiana, and he's more than eager to put an end to a two-game losing streak to LSU.

It will be a tall task for a Razorbacks team that hasn't won an SEC game since last season and is the lone school in the league without a conference victory this season.

Especially against an LSU team that is still holding on to hope — no matter how remote — that it can climb back into the College Football Playoff picture after its second loss of the season last week — a 29-0 defeat at the hands of No. 1 Alabama. The Tigers will be playing their first road game in more than a month. Of more concern is how they'll bounce back after investing so much emotion into the shutout loss against the Crimson Tide.

"This is going to be a very tough road game after a disappointing loss to Alabama, but our team is going to bounce back and we'll be ready to go," LSU coach Ed Orgeron said.

Orgeron said safety John Battle will dress for Saturday's game, but that he would only play in an emergency situation. The senior was injured on the first play of last week's loss, and he has 37 tackles and three interceptions this season for the Tigers. Also, Orgeron said starting defensive lineman Breiden Fehoko won't play after not practicing all week because of an injury.

Arkansas running back Rakeem Boyd had rushed for 100 yards or more in three of the last four games, and he had 99 in the fourth game. The sophomore is one of seven SEC rushers with three 100-yard rushing games this season, and he will face an LSU defense that's allowing 147.2 yards per game on the ground.

First-year Arkansas coach Chad Morris once interviewed with Orgeron while the LSU coach was at Mississippi. Morris was then a high school coach in Texas and didn't get the job with the Rebels, with Orgeron hiring Hugh Freeze instead.

"I remind him every now and then when I see him that he didn't hire me," Morris said.

LSU is 7-0 in games following a loss under Orgeron, and the Tigers haven't lost back-to-back games since losing three straight in 2015.

Arkansas linebacker Dre Greenlaw and wide receiver Jared Cornelius are expected to return after missing time with injuries in a loss to Vanderbilt two weeks ago. Greenlaw is the SEC's active leading tackler with 300 stops, but he is battling ankle injuries and only played briefly against the Commodores. Cornelius missed the Vanderbilt game with an ankle injury.